Morgantown, WV – If you’ve ever dreamed of eating a Fat Bitch then ordering a Fat Blunt for the road, Morgantown is the place for you. It’s what I did there, but more on that later.

I arrived in Morgantown around 5 a.m. Wednesday morning, which is a fine time to arrive in any place.  The streets are clear enough in these early hours that you can drive slowly and figure out the lay of the city. This strategy was particularly helpful in hilly Morgantown, with its tight, twisty, one-way roads.

Morgantown is a beautiful little mountain town in north-central West Virginia, home of the University of West Virginia Mountaineers, the late actor Don Knotts and Mylan Pharmaceuticals, the worlds largest generic drug maker. It’s a progressive place, with lots of natural food stores, cafes, art galleries, eclectic boutiques and a surprisingly diverse population.  Another perk is the abundance of cheap parking, at 50 cents an hour, with many 10-hour stalls.

Established in 1767 along Decker’s Creek, a tributary that feeds the Monongahela River, the town has had three recent national distinctions. First, for much of the last three years, it’s had the lowest unemployment rate in the country. Secondly, the Princeton Review recently named it the nation’s number two party town, an honor many around here relish. Third, its Fat Bitches (cheesesteak, chicken fingers, mozzarella sticks, mayo and ketchup) are consistently ranked in college polls as among America’s best sandwiches. 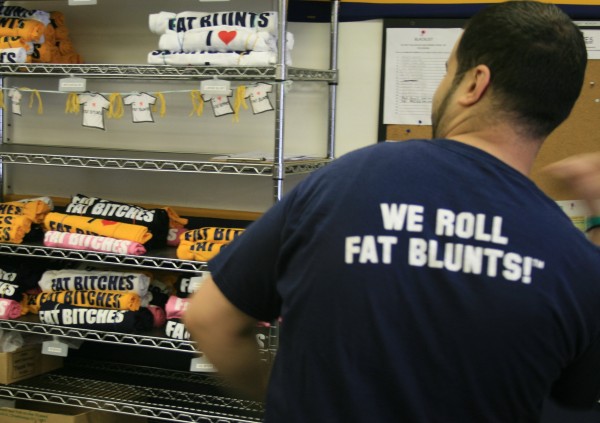 George Tanios, owner of U Sandwich, wants to the world to know he rolls Fat Blunts.

At Sandwich University, owner George Tanios, 28, relishes the honor of rolling up high-fat grinders all day until bar time. The bulk of the items on Tanios’ menu are prefaced with ‘Fat,’ as in Fat Blunt, Fat Obama and, of course, Fat Bitch. Employees don t-shirts that read either ‘I Love Fat Bitches’ or ‘I Roll Fat Blunts.’ He is the antithesis of healthy eating. In fact, there isn’t a veggie to be found on the menu.

He hopes to soon franchise out his signature eats on college campuses throughout the mid-Atlantic region and beyond. “We’re taking these bitches national,” he says.

Tanios tosses me one of his ‘I Love Fat Blunts’ t-shirts and tells me to visit his downstairs club later on, as it’s ladies’ night and, he promises, there will be lots of ladies. I agree to check it out, thank him for the t-shirt and continue on. It was shaping up to be the first pleasant day since I left Philadelphia and wanted catch some sunshine.

Garry Bowers, owner of Morgantown’s radio station WCLG, says Morgantown gets better the older he gets.

Next I met with Garry Bowers, owner of the local AM and FM radio stations. Bowers was born and raised in Morgantown. He began working at WCLG as a college student in 1956 and in 1983 became its owner. At 72, the retired Air Force colonel has all the energy of the college kids that people the block. “I’ve had a liver transplant, a successful prostate treatment, but nothing can slow me down, baby,” he says. “It’s the mountain air, I’m telling you.”

Bowers said he never wanted to leave the town. “What’s not to like?” he asks. “It’s gotten better as I’ve gotten older. The people are friendly, the quality of the health care is great. It’s a vibrant, low-crime community.”

A high premium is also placed on the area’s natural resources. A visionary riverfront development along Decker’s Creek boasts a mile-long walkway and a public amphitheater for music and performance art in Hazel Ruby McQuian Park. On the edge of town, just off of the Don Knotts Boulevard, is Dorsey’s Rock, a public picnic area with breathtaking views of the valley. Further down, 13 miles east on I-68, is Cooper’s Rock State Forest, a very well maintained 12,713 acres of trails, campgrounds, picnic areas and scenic overlooks.

On the outskirts of Morgantown’s downtown business district are several neighborhood haunts, among them Gene’s, a cozy little neighborhood dive in the Greenmont section that serves only beer. Known locally for its hot dogs and pepperoni rolls, Gene’s brings in bluegrass and rock-a-billy artists several times a month and seems to be a favorite for those down on the college scene. 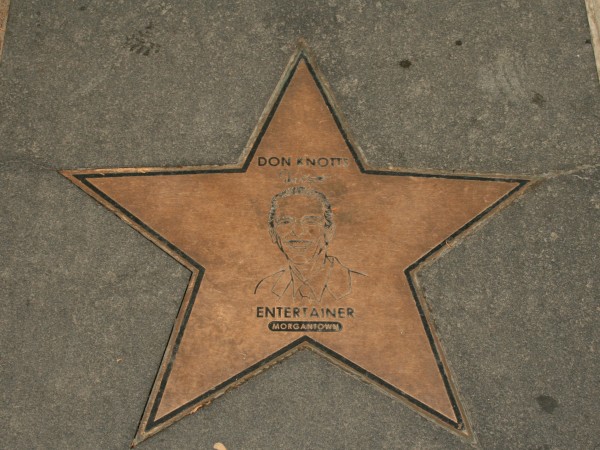 The late Don Knotts, a Morgantown native, is honored with a star outside the Met Theater.

But it was the nightlife here that everyone said I needed to experience. Around dusk, I met a New York City transplant moved to Morgantown last year for “a change of pace.” We chat a little. I tell him I’ve come from Philly. He guesses I’m on the level. “I used to sell cocaine in the Bronx,” he confesses, lifting up his shirt to reveal a gnarly scar running from his sternum past his belly-button. “Then this shit happened so I got the fuck out.”

“Nah, dawg, I don’t do pictures,” he says. “But I’ll tell you what: stand here on this corner, on a Friday night, you’ll get pictures. I’m telling ya, you’ll see half-naked bitches puking all over the place. You could write a book.”

No name, no pic, he flicked his square and wished me luck. “This corner, dude,” he said. “Just stand here and watch.”

Around 9 p.m., I ventured toward George Tanios’ club, located downstairs from Sandwich University, but Torrie the bartender warned that it was ‘dead week,’ meaning students were studying for next week’s finals. “It’s going to be a really slow night,” she said.

And so it was. Eventually, I called it a night and decamped without witnessing Morgantown’s fabled nightlife. But it wasn’t all a bust. I got to eat a Fat Bitch and grabbed a Fat Blunt for the road. What more could a guy ask for?