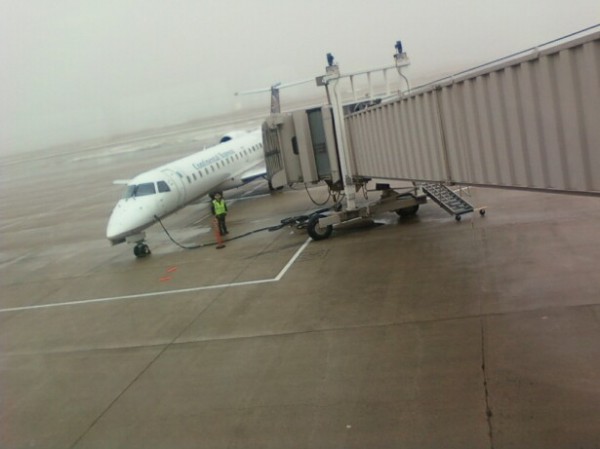 The fog was thick just before my 3:15 p.m. departure from Madison.

I was twice stranded in Madison last summer due to van troubles, making it back to Philly a week after I was supposed to return to my job in September. Now here I am three months later having missed another week of work due to an inability to get from here to there.

Five days after a blizzard slammed the east coast, delaying thousands of flights, I was finally on my way back to Philly.

The fog in Madison yesterday was thick, raising concerns I might again be delayed. But everything was on schedule when I arrived at Dane County Airport. Worried that a last minute crush of Badger fans heading to Pasadena for the Rose Bowl might congest security, I arrived two hours early. But the place was a ghost town. Nine hours stood between me and Philly, which is a long time to spend waiting. The anxieties of waiting and flying combined are the worst, so I popped a Clonapin before sailing through security and before long was at such ease that those hours passed as minutes.

Next thing I knew we were making our final descent into Newark, NJ. 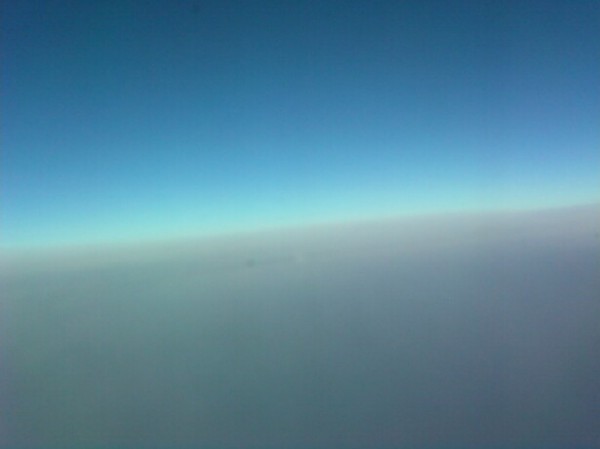 It was a sunny day above the clouds.

From the airport I took the air train to the Amtrak station. The counter was closed but, like the airports, you can self-check in to get your boarding pass. Next to the only unoccupied machine stood a Hispanic man who appeared at the latter end of middle age. He indicated that I could use the machine. After it spit out my boarding pass, he hands me his train voucher from Continental Airlines, points with his other hand to the machine and shrugs his shoulders.

He swipes his card and I follow the prompts, but it says his reservation can’t be found. I try again, triple-checking that I’ve entered the right flight number. No luck. He tries again, but the machine’s Spanish option isn’t working. I try again in English to no avail. So we tracked down an attendant and I explained the situation.

“Did you enter the right flight number,” she asks, smacking her gum.

I take his voucher and hand it to her.

“What, he don’t speak English or something?”

I furrow my brow. He cracks a smile and shrugs.

“Let me see what’s going on,” she sighs.

Eventually, she marks up the voucher and prints his boarding pass.

“Gracias!” he says to us both, clearly grateful. 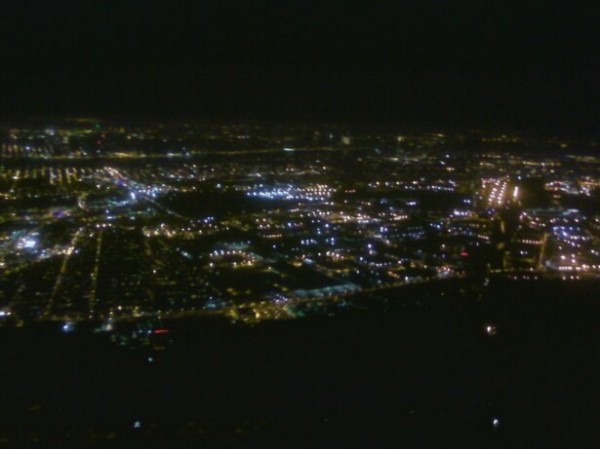 Upon arriving in Philly, I noticed the Spanish speaker again. He was walking ahead of me at 30th Street Station, moving toward the same exit I use. Outside, he was greeted by two small children who cheered his arrival. He shared hugs with the two women also awaiting him near a car. Then a young man gave him what looked like a very firm handshake before taking it upon himself to load the traveler’s bags in the trunk.

I continued on toward the trolley station, among the well-dressed revelers en route to socials and mixers and passing by the beggers for whom the new year promises little. Before long, I was home to an empty, but warm apartment. I dropped my bags, turned on the television and plopped like lump on the couch. To the cheers broadcast live from Times Square as well as those rising from the street below, I fell away just after midnight, dreaming in the new year.