A Wife’s Revenge | The Feral Scribe

A Wife’s Revenge | The Feral Scribe 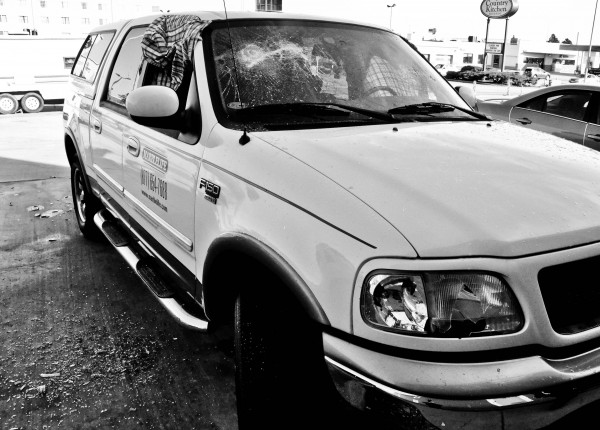 A woman battered this truck after finding it parked outside a motel late one night.

Western North Dakota—Night has fallen on a particularly grueling, but otherwise unmemorable rainy day. A man who assembles the steel skeletons of soulless commercial space each day beginning at sunrise decides tonight he’s going to kick it with a couple of bro-ish co-workers before returning home. He tails the bros to the motel they’ve called home for over a month now. Six-packs in hand, they plod up the wet stairs in mud-caked boots, to Room 143.

After soaking up some warmth they sip eagerly from their bottles when a love song blares suddenly from the man’s t-shirt pocket. His wife of many years is calling, but instead of answering he silences the ringer, a little embarrassed, as the bros roast him over the cheesy and slightly dishonest ringtone. Having committed to just a beer (maybe two), he believes he won’t be long.

According to the bros’ less florid retelling, the man kills that critical first beer, then listens to his wife’s message—the first one. For nearly three minutes she prattles in that tone, a tone all but daring him to ignore her subsequent calls, seven so far. He reaches for that second beer, which tastes even better than the first. Revisited by something close to happiness, his silent dread over the looming showdown with his wife becomes lost in the neuroses of lesser worries.

In this moment he remembers how it feels to exist, to be his own man.

The bros are younger than he is, products of different generations. As they expound on their unabiding love of pussy, the man’s phone vibrates, mercilessly, over and over—until suddenly it isn’t. She isn’t the woman he married. The bros tell him he needs new pussy, each avowing to its morale-boosting virtue. The last time he scrumped on his wife’s, he had to imagine it belonging to another, lest he unhinge the sluices of her insecurities.

Guilt creeps. He decides to call her, but, to his relief, his battery is dying. Liberated by the excuse, he pops the top off another, confiding to them the tale of her weight gain and his concurrent rigidity. Outside, something makes a kind of thud, followed by another and another. They ignore the first few, then flock to the window to see what the fuck.

The man can’t believe his eyes. Aghast, he reaches for his phone, but it’s dead. If he goes downstairs he’ll be dead too. There is nothing for him to do but watch.

The woman was a pro with the bat, swinging as she circled the vehicle.

Guests in Building No. 1 said the commotion began around 10:30 p.m., with a noise similar to someone knocking dirt from a boot by banging it against the curb. Because I had forgotten to turn on the exterior lights, the parking lot was crazy dark, except for a white pickup illuminated by the headlights of a maroon minivan. Witnesses described the driver as a burly, gruff-looking woman—like a lezbo, one guest offered.

After exiting her vehicle, the woman placed a phone call before grabbing the baseball bat. With the efficiency of a professional vandal, she approached the truck, taking out both taillights, red plastic shards spewing through the air. She struck out on her attempt to take out the rear passenger-side windows. The front-door window, however, shattered with ease.

Soon, everyone in Building No. 1 was at their bathroom window, watching the maniacal lady lash out at the white Ford. Once the headlights were smashed to bits, she tried with all her might to shatter the windshield, but managed only to crack it. Before moving on to the driver’s-side window, she lighted a cigarette. Harnessing the rage summoned by more than two dozen unanswered phone calls and any number of other untold grievances, the heavy hitter reduced the window to hundreds of tiny pieces, many of which landed in a nice little pile I swept up the next morning.

After shaking off any clingy shards, she stepped back, as if admiring a job well done. She again pulled out her phone, dialed a number, and began yelling at an alleged cheatin’-ass motherfucker and making threats against whatever bitch he was with. Had she glanced upward she likely would have seen who she was calling staring down at her from Room 143, flanked by two dudes.

Even worse, the rain fell hard that night, rendering the flannel windows impotent against Mother Nature.

Not long after his wife speeds away it begins to rain again. He has decided to crash in the bros’ motel room. They loan him a couple of shirts to use as makeshift windows, but somehow the rain still soaks the truck’s interior.

I speak with him a bit the next morning as he better assesses the damage, worried about what’s in store for him at home. He says his wife saw the truck outside the motel while driving all over town in search of him.

I heard it was quite the show, I say. Kinda bummed I missed it.

He stays with the bros a few nights more, before presumably returning home, where life waited.