W.B. shows off his warning for trespass.

Western North Dakota—Last night a couple of the housekeepers, all of whom are from Cape Verde, stopped by the office to tell me about the racist man working at the gas station across the street, how the man, for no reason, booted them from the store prior to the cops doling out warnings for trespass.

What happened went something like this: Kenny purchased W.B. the wrong kind of cigarettes. W.B. returned moments later to exchange the pack for the correct one. One of the clerks, an older man with a scraggly gray beard, began yelling at them, because Kenny had paid with a $100 bill, which ate up the change he had in his drawer.

Why do you always have to pay with these? he allegedly screamed, shaking the bill in W.B.’s face.

W.B. told the officers, who looked about nineteen, the clerk made a comment about him being black. 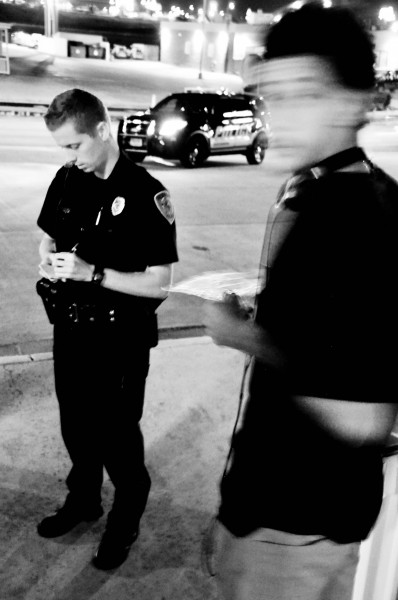 Kenny takes a break from looking at his warning.

The officers asked what had set the man off.

W.B.’s brother, D., who was in the store to buy a bottled water, told the officers that when the clerk demanded they leave he asked for the reason why.

I tell him ‘I know my rights,’ he explained. I learn my rights from, ah, the small-business administration class. They say, ah, in America, you cannot discriminate.

D. is cool shit. He is the group’s intellectual core. His ancestors were enslaved by the Portuguese, who colonized Cape Verde, a 10-island archipelago off the coast of western Africa, in the 15th Century. For more than two-hundred years it was an oasis for pirates, privateers and slave traders. In the 19th Century, D.’s family became bankers, until an economic crisis hit in the late-1800s.

When the finances go bad, my family, ah, they take all of the money that was left and they became pirates, he said. The Brandao pirates, they are very famous in my country and Brazil, because they, ah, they take everyone’s money. My family return to the banking when, ah, things they get better. Me and my brudder, we are very good with the numbers.

He is a few credits shy of his degree in economics. All but one of the Cape Verdeans who work here are male and all are in America on student visas. They’ve come here to work because, as they say, there aren’t any jobs in Boston, their primary residence. But what many people around here see isn’t young men with family histories and personal stories, ambitions and dreams, but rather a gang of loud and intimidating black males.

But in their country, they are the rich kids—educated, literate, with families whose expectations for them are high. It’s sad that in 2013, so many Americans still fail to see the diversity of the planet’s black population. These kids are the farthest from thing from members of an American street gang as you get.

The boys explain to police what happened at Tesoro.

They’re an excitable bunch, the housekeepers—loud talkers whose native tongue contains elements of Portuguese, Spanish, Italian, French and English. They’re conversant in each of those five languages. Because they—nine in all—live at the motel, too, they often kick it after work near the entrance to the building housing the single-bed rooms. They’ve put the fright in more than one customer, one of whom expressed to us his worry they may mug him.

Twice I have been asked whether it bothers me to have to listen to that all day.

I’d be driven bananas, a pipeliner said. These Mexican fellas I work with is always speaking, well, Mexican, I suppose. Kinda feels like you’re not even in America sometimes, don’t it?

It’s one of the things I like about America, I said, sharing that in Philly, government literature is printed in, like, twelve different languages. Chinatown. The Italian Market. Northern Liberties. Little Vietnam. Gray’s Ferry. So many samplings of people packed into one city!

I’d love if I could speak two languages, I said, much less five.

When the housekeepers are together in a group, lots of laughing and loud talking is involved. Of course, no one know’s what they’re laughing at, and I think that bothers people, like they might be the ones being laughed at. They love their country. It’s fun hear them talk about the differences between America and Cape Verde. They way they describe it, you’d think Jimmy Buffet was their nation’s founder.

Two of the three officers who responded to a trespassing complaint.

In, ah, my country, you can smoke the weed while you walk without making, ah, the trouble, Kenny explained. And the weed is very good there, too. Very green. Beaches everywhere. And the water… the water is clean. Not like American water. Very dirty, American water.

Another big difference is that these guys are big on rights. They know their rights because, unlike many American-born citizens, they take time to not only learn them, but assert them, too. They know it’s illegal for a business to discriminate on account of race. The cops didn’t seem to buy that explanation. Instead, they gave everyone present written warnings. If either of them steps foot on Tesoro property again, they’ll be taken to jail.

This morning, when the bossman visited, they framed the whole incident with the clerk as a civil-right’s violation.

He called me ‘black,’ W.B. explained. That is why he don’t like us.

Like the cops, the bossman was none to sympathetic.

But you are black, the bossman replied. You know that, right?

Looking at D., W.B.’s brother, the bossman continued, Tell him he’s black, because he doesn’t know.