Bob the Dog recently had a near death experience.

Española, NM – My landlord, who lives on the property I do, was recently away for four days. In that time I managed to run over her dog with my van while another was picked up by animal control. And guess what? She wasn’t the least bit upset about any of it.

Running over Bob, a white lab in his later years, was awful. The worst part is that I don’t know how it happened. I backed out without incident, but as I accelerated forward I heard from beneath Purple Thunder the most horrifying yelp – the doggy equivalent of screaming bloody murder. I jumped from the vehicle after throwing her in park. There Bob was at the rear, on his back beneath the vehicle. With haste he rolled over and crawled to freedom, limping with his tail between his legs. Aside from a scraped snout and a few other superficial wounds he seemed okay. As he sauntered over to a shady patch of ground, where he plopped down against an adobe wall, I ran Sarah to work.

When I came back Bob was nowhere to be found. I spent nearly an hour scouring the property – 2.5 acres – to no avail. I began to worry his injuries were worse than they appeared and he’d gone off somewhere to keel over. I felt sick to my stomach, but suspected the other neighbors had taken him in, especially by the third day when no discernable odors of decomposition were detected. Turns out this was the case. The other neighbors, believing Bob had been attacked by other dogs, put him on lockdown until our landlord returned.

“Some dogs got the better of Bob,” he told me. “Did you see what happened?”

“Actually, I ran him over with my van,” I confessed.

I don’t know how this accident happened, but fortunately Bob was okay. Aside from a few scrapes, he has nothing to worry about.

The stray I took in resting inside my casita.

Last Wednesday I stopped home to find an animal control officer in my driveway talking to Gary the Gardner. They told me Rumpus, my landlord’s other dog, had been picked-up and was going to impound until my landlord returned. The Officer mentioned the girl walking the white dog (my dog) was being ticketed because she’d been walking Rumpus without a leash.

Realizing then what was going on, I explained when we walk our dog Rumpus often follows us off the property. He said that didn’t matter. I began to protest, asking why she would be ticketed for being followed by a dog she didn’t own. He didn’t have a good answer. Instead, he began accusing me of questioning his authority. More than that, he said I was making him look stupid in front of Gary.

“I’m just trying to understand, because that doesn’t seem fair,” I said.

“You don’t question me,” he replied.

He asked how long I’d had my dog. I explained she was a stray I took in two months ago.

“So this isn’t even your dog?” he asked. “Is she current on her rabies vaccine?”

“We’re taking care of all that once she’s out of heat,” I said.

“What do you mean another ticket?”

He was now ticketing me all of a sudden because the dog wasn’t registered with the city, she didn’t have her shots, and she wasn’t spayed. I protested even more and again he became upset that I was making him look stupid. He asked for my ID. Looking at my Wisconsin driver’s license, he asked how long I’d been in New Mexico. Six months, I said.

“Oh no,” he said. “I’m gonna have to call in an officer because that’s another ticket. You have to have a New Mexico driver’s license if you’ve been here more than three months.”

(I’d been told six months by a sheriff’s deputy who pulled me over weeks earlier for speeding.)

I tried explaining I’d been denied a license because the clerk couldn’t read the middle digits of my number so I was waiting for the Social Security Administration to send me a new one.

He told me again it doesn’t matter and proceeded to fill out a paper indicating what I was being cited for. By this time I was livid.

“Now you wait just one goddamn minute!” I roared.

“No!” he shot back. “You don’t question officers. How you think that make me look? It makes me look stupid.”

Then, without any warning at all, he succumbed to a sudden change of heart. He asked if we’d make sure Rumpus stayed on the property if he released him to me. I told him I would. So he exits the truck and opens the cage in the back. Inside side is Rumpus, panting and wagging his tail as if it’s all a big fun game. I grab the big dummy by his collar and handed him off to Gary. Together we walked into the courtyard of my landlord’s property, barricading him inside.

To my utter amazement, the officer then said he wasn’t going to ticket me after all, and radioed in that he wasn’t able to catch Rumpus. (I later learned Rumpus had followed Sarah as she walked our dog and some well-meaning citizens called animal control about an unleashed dog.)

I began to suspect he didn’t really understand the laws he’s paid to enforce, but decided to not push it. He’d just let me keep $140.

“Next time,” he said. “You don’t question officers.” 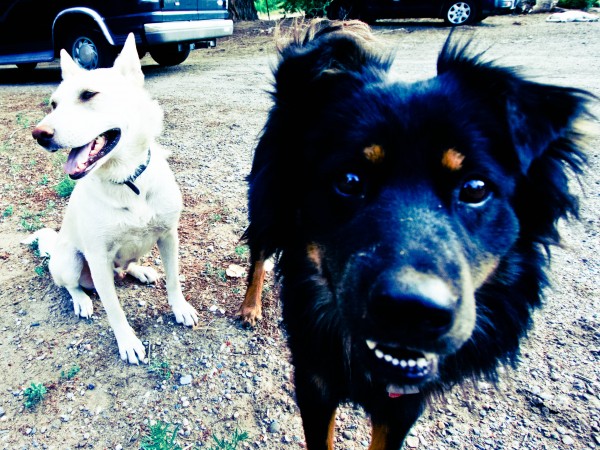 My dog (left) and Rumpus (right) have become best buds.

The stray I took in during July has been in heat the least week or so, causing all sorts of havoc around here. It wasn’t anywhere near as messy as I’d feared, so I’m thankful for that. But I’ve had to keep her chained up and under close watch, lest I wake-up to a litter of whimpering pups some not-too-distant morning from now. Both Rumpus and Bob are fixed, but that hasn’t deterred Rumpus’s persistent attempts to mount my bitch. My dog clearly wasn’t into him. She’s sit as he tried mounting her. She wants Bob, but Bob, being the property’s elder statesman, had no qualms rebuffing her advances with some growls and barks.

The other males drawn to my house on account of my dog’s biology, all of whom still have their nuts, weren’t as easy to deal with, particularly the little gremliny-looking lapdog who made the most earnest effort of all to plant his seed. I felt bad for the little guy. The whole situation was obviously stressing him out, but I wasn’t going to let it happen. As the days wore on he became more brazen in his efforts to impregnate my dog.

One morning my dog and I were on a walk when this little thing appeared from nowhere. I shooed him and stomped my feet and eventually took to throw rocks his way, not to strike him, but to get him thinking about how futile his effort was.

I could see the determination as he and I locked eyes waiting for the others’ next move. He seemed to be backing off so my dog and I began walking toward home when the little bastard runs up and bites down on my dog and begins pulling her in the opposite direction. He let go once I lunged in his direction, but came right back, biting down on a fold of her skin and attempting to pull her from me. And so it went until we arrived home.

Now that she’s out of heat, the little guy no longer comes around. Bob doesn’t have to deal with the annoyance of her advances and Rumpus no longer suffers the rejection of my dog wanting to just be friends without benefits. I’m sure many of the dogs tied up on surrounding properties are more at ease now that the scent has disappeared. And she’s happy to run free again.

As for me? Well, I’ll breathe a little easier when it becomes clear that little gremliny lapdog failed to pump my dog with his contaminate. Until then, my fingers are crossed.