Comp Time with Marcus the Karcus | The Feral Scribe 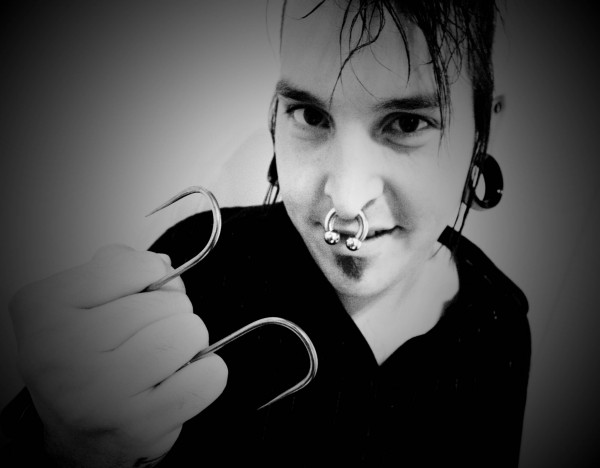 One day in the mid-1990s, Marcus the Karcus, then 16, was flipping through a magazine in an underground bookstore when he came across some pictures of people hanging from hooks. Having always been drawn to the macabre, young Marcus was instantly mesmerized by the photos. “This is the world I wanted to be in,” he recalls thinking. “It seemed like one of those things that only went on in big cities, not something that was accessible to me.”

Nine years later, Karcus, as he’s generally known, began exploring body modification. One day while getting pierced, he noticed a picture on the wall of a shop employee hanging from hooks. In that moment, his life changed. “It was like I’d found the Holy Grail,” he says. “I asked, ‘How do I do that?’”

Now 32, Karcus runs a body piercing business, and performs pullings and suspensions, practices pioneered by certain Native American tribes as a spiritual ritual, but done today more as performance art. Having now been suspended with flesh hooks upwards of 50 times, he still recalls the thrill of his first time. He found it so enjoyable that he didn’t want to be unhooked. “I remember everyone looking at their watches and being like, ‘Okay, we’ve got to go,’” he laughs.

Each month, Karcus hosts a fetish night at Club Inferno in Madison, Wisconsin, called Sabbat de Sade or Sabbath of the Sadist. His gruesomely themed events, which riff on taboo subjects such as necrophilia, have been a staple of the city’s nightlife since he began them five years ago. On July 17, his long anticipated Serial Killer Night will feature an array of activities, including a class on bondage ropes (more specifically, what to do once you’ve got someone restrained). He’ll also be doing play piercings and, of course, suspensions.

Karcus recently sat with The Feral Scribe to discuss flesh-hook suspensions, the people who seek his services and why he was once asked to sew shut a person’s eyes.

Tell me about your first pulling or suspension?
It was set up in someone’s backyard. There were two hooks in my back and two hooks in my girlfriend and we pulled against each other. I’d get into the zone, then she’d break and I’d have to stop. I’d get into the zone again and then she’d break. I was like, ‘Cut me away from this girl and tie me to a damn pole!’ So they cut us and tied us to poles. From the start I couldn’t get enough.

Are the hooks painful?
The initial piercing is like a pinch. Then, as you start doing it, that first initial separation of subcutaneous tissue is like a little sting-y. But once you get off the ground, surprisingly, it all subdues and then you’re just like, ‘Weeeee!’

It’s possible that my brain doesn’t process pain the same way other people do, but if you look at it as just an intense sensation, some sensations are happier than others, but they’re all just sensations. Once you stop looking at it as pain, it works a little different. A guy once told me, ’It’s not the pain that’s the problem, but the avoidance of pain.’ Once you accept it and incorporate it, you can get through anything. I keep that as a motto if things do start to hurt.

Do people generally find the experience enjoyable?
There have been a couple of people who did it and were like, ‘I did it; I’m done.’ One guy wanted to do a pulling. So I put in the hooks and he took them just fine, and he gets up there and tugs on the strings three times. He looks at me and asks, ‘Is that it?” And I was like, ‘Yeah, that’s all it is.’”

This other girl I did, I put two hooks in her and I was there for like three hours. This girl couldn’t get enough. Her legs were hurting before her back got sore, so I told her to get down on her knees and pull that way. She kept pulling for like three hours. She couldn’t get enough, so I pulled out some play-piercing needles, so I’m piercing her all over and she’s got blood all over her face and obviously having a really good time. But of the two people, I was really surprised that this guy was like, ‘eh,’ and the girl was like, ‘I want more.’

It seems like suspensions are becoming more embraced by the mainstream. Do you see many soccer moms?
It’s definitely getting more popular. There are suspension crews popping up in every city.  I have gotten some people you wouldn’t expect: people who sell insurance, people who work in research labs, all types of different people. I think it’s people who are looking for an alternate path, who are looking to break out of the everyday life type of thing.

While you’re suspended, what’s happening mentally? Is it like a drug euphoria?
Different people get different things out if it. I think it tends to attract adrenaline junkies, just by nature. I don’t think any one is really conscious of what’s going on chemically inside their body. I know a lot of endorphins are released and a ton of dopamine is released, but you don’t necessarily go into a trance.

If it’s a particularly painful one, where you kind of have to relax the whole time, you’re probably not getting as into it. I find it’s harder to do a suspension when you’re not moving around. The more you kick your legs and move and swing around the easier it goes.

How much weight can skin support?
A single hook, placed properly, will hold up to 300 pounds. I’ve seen people suspended from single hooks. The skin can hold a lot, which is strange since the skin is just a bunch of itty-bitty cells touching each other. 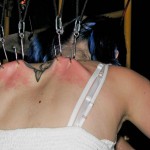 Is there any physical damage that occurs?
Different layers of skin start to separate so that the fatty tissue area starts to open up a bit. We don’t know the long-term ramifications of constantly separating that tissue. Some people, at the end of a suspension, end up getting air inside that sort of leaks in through the pierced hole, so you have to burp that out. We’re not going through muscle or anything. Sometimes scar tissue builds up under the skin.

What’s the craziest thing someone has asked you to do?
Of the fun interesting things I’ve done, sewing peoples’ eyes and mouths shut is probably on the top of the list of extreme things. We had Malice in Wonderland, a band that is no longer together, that wanted to do a music video. And a girl suggested we sew her eyes and mouth shut. It took us a couple of hours, but we dressed her up as a cute little doll and then she was put inside this cistern that looked like a little cave and she was pawing around. Another fun thing I did was sew zippers onto a guy’s forearms.

Tell us about Sabbat de Sade and the upcoming Serial Killer Night?
Sabbat de Sade is a fetish night that I’ve been running for the last five years. I started the night wanting to do a highly engaging and interactive fetish night. Before this one, I’d gone to a lot of fetish nights, but they always seemed to be centered around a stage performance, where someone was on stage doing something and everybody stopped to watch the stage show. I thought ‘Why is everyone watching the stage show when they could be doing that stuff?’

[An early theme] was a cops and robbers and night. We got dressed up in police gear and had handcuffs. I built a little jail cell inside the Inferno and I had a girl walk around with a Polaroid camera and she’d ask people if they’d want to be arrested and take their picture. She gave me the stack of Polaroids and we went around the club, like a little manhunt, and asked people, ‘Do you know who this person is?’

Once we’d find the person, or if someone pointed them out, I’d be like, ‘You’re dressed like a cop. Lets go get this person.’ We’d march up to them, shine lights in their face and throw them to the ground…

Some nights I go for the light and fluffy, but other times I like over-the-top themes. One night that was really over-the-top was the necro-night. People were like, ‘I can’t believe you did a necrophilia night.” I’m like, ‘Of course I did!’

Serial killers is another theme that I’m attempting to go overboard with, to get some shock value out of it. I started doing short classes at the opening of the events, because it’s usually dead early on in the night. What I’ve got lined up for this one is a class on what to do to a person while they’re restrained, which is fitting for a serial killer night. I noticed there are a lot of classes on how to restrain people, on how to do knots, and how to do safety, but no one ever talks much about what you do once you have someone restrained and on the floor. What do you do with them?

After that, I’ll be doing play piercings, so I’ll be putting needles in people. I know there’s a few people in the area who like to do play piercings, but I get a little nervous about random people doing it, so I try to contain it a little bit. And after an hour or so of play piercings, I’ll be getting into the suspensions, so the people who come for some of the extreme stuff can do some of that.