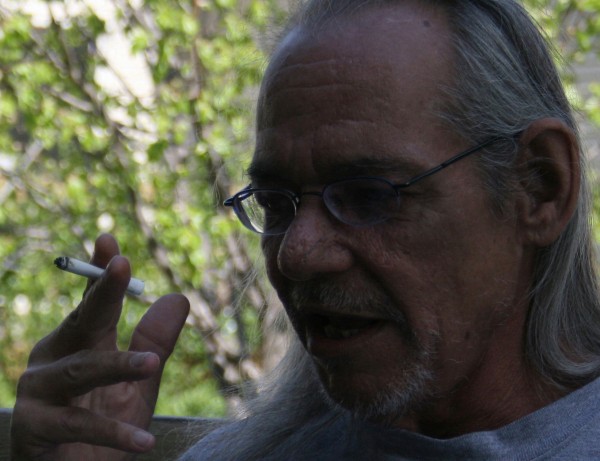 Arguably there are no greater heart-pounding conditions under which to travel than those that come with being a fugitive from justice. Just ask Gerald Heckathorn, who, in the early-1980s, went on an 18-month cross-country bank-robbing spree in his prized white Cadillac El Dorado. “I went everywhere, man” he recalls. “I was living large.”

That is, until the FBI zeroed in on him.

Gerald was an unlikely criminal. Born to bohemian parents in the San Francisco Bay area, he rebelled as a teenager by going to war in Vietnam. Less than three weeks after arriving in Saigon, a Viet Cong kid somehow ran into Gerald’s bayonet, knocking them both to the ground. While impaled, the kid beat Gerald in the head with the butt of his rifle, breaking his neck and ending his service.

After recovering, Gerald ran afoul of the law and served a brief stint in a California prison. Determined to make a better life for himself upon his release, Gerald went to school, but circumstances led him down an alternative career path upon graduating.

Now 60, Gerald lives in Madison, WI, where he remains on parole. Here, The Feral Scribe caught up with him earlier this month to discuss his time as fugitive road-tripper and bank robber.

The Feral Scribe: How did you get into bank robbing?
Gerald Heckathorn: Well, I went to teller school. Paid $500 for it. Got out of prison in California and wanted to turn my life around. I thought it was legitimate, legal work that might help me get my life back on track.  They advertised that they would train and place you. So I did that. Six month course and when it came time to be placed they said, ‘You can’t be bonded because you have a conviction.’ I said, ‘Well you should’ve told me that, now gimme my money back.’ They said, ‘No.’

I’ve always had criminal in me, and I think I’m semi-intelligent, so I thought of a plan to rob banks. I knew the inside of banking. I knew what the tellers were supposed to do if they were robbed, because I just had schooling for it. So, I used that knowledge to get them to give me the money.

I went into the first bank with a check all made out and on the back, instead of an endorsement, there was a typed note that said, ‘Please give me all of the money in your drawer. Don’t turn around. Don’t press the alarms. Don’t give me the dye bomb.’ Then, in bold letters, I wrote, ‘I do not want to hurt anyone.’ The feds said that was an implied threat.

What was your strategy?
My strategy was this: I’d go into a town I’d never been in before, let’s say Des Moines, Iowa, which is where I got caught. I call ahead on the payphone, the hotel that is, and make reservations for John Smith and then pay cash when I arrived. I’d get the phonebook out and it had all the information I needed. In the Yellow Pages, B for banks. So I’d find four. I’d get three or four in a row, working my way toward the Interstate. While I was at the second bank, the cops would be at the first, and so on until they’re run thin and are completely busy. Then I hit the Interstate. By afternoon I’m in a nice hotel in another state.

Then I’d fly to Mexico, buy an ounce of heroin and stick it in the crack of my ass – not up my ass – but in the crack. Back then you could get away with that. Then I’d fly back to where I had my Cadillac. I was doing about two grams a day, smoking weed and hitting the banks.

What’s it like to travel as a wanted man?
I was scared to death the entire time. Scared I’m going to get caught. My head was on a swivel. I was scared to make friends. Basically, I was all alone. I’d sit in a room. It was the only place I felt safe. But I knew the hammer was going to drop some day. But I was addicted to the crime and the drugs. The first time I did it, I left puddles of sweat on the counter I was so nervous. I started laughing and crying at the same time on my way out of there, but then it became so easy. I didn’t need to keep doing it. I could’ve stopped, but I didn’t.

How many banks did you hit during this time?
I went back to a lot of the states twice, because I ran out of banks. Between 50 and 100 over a year-and-a-half, I’d guess. Some places wouldn’t give you the money, especially the blacks and the Asians. The Asians would pretend they couldn’t speak English. But of course they could speak English. You can’t work in a bank if you don’t speak English. I’d avoid the black tellers because they weren’t cooperative, either. I was chased, too. Once by a woman in heels and once by an old man who eventually caught up with me, so I kicked him in the nuts. I felt bad about that, but that’s the only violent thing I ever did. He was relentless.

How did you get caught?
I don’t know exactly how they got onto me. A cop pulled me over coming into Des Moines. I was all dressed up, had my notes in my pocket, was staying in a nice hotel, I’m looking impeccable and my car was just detailed. I got pulled over because, the cop said, my car was so clean. It was snowy and slushy and everyone’s car was filthy, but mine was shining. But I think they were onto me as I left the hotel.

As I was driving, before I saw the trooper, I saw a Crown Victoria. It was blue, and it was full of cops with hats and windbreakers on and a uniformed cop in the driver’s seat. I thought, ‘That’s unusual.’ I thought right then something’s up. Then this cop pulls me over. He asks about my car being so clean, asks if it’s my car. He was letting me go, but then says, ‘Wait just one minute” and he went up and looked in my windshield and wrote down the VIN number.

Why didn’t you leave after that?
I was going to. I got to the first exit and said I was going to blow off Des Moines, forget about it. When I got back to the hotel, I walked in the back door. Right after I walk in there’s a guy tapping on the back door. He’s got a green windbreaker on, but it doesn’t say FBI. So, he taps on the door, wants me to let him in. I open the door and hold it for him and he runs past me and I see FBI on the back. And I’m thinking, “Aw, fuck!”

So I run to my hotel room, and I leave everything – my suits, my typewriter – everything except my briefcase full of money and drugs, and I walk out that same back door. As I’m walking out I look back and I catch a glimpse of all those guys I saw in the Victoria out in the lobby.

So, I go out the back door and see another guy in a green windbreaker coming around the corner. He goes, ‘Excuse me, we’re looking for someone driving a Cadillac. Do you drive a Cadillac?’ I got my keys in hand, so I says, ‘I sure do.’ And he says, ‘Well which one do you drive?’ And I say, ‘Well, that red one right there.’ Mine was white. And he says, ‘Okay, thanks a lot.’ Then he stops again and turns around. ‘Would you mind opening the door?’ And I say, ‘Sure.’ So I stuck the key in the door and the alarm went off. And so I was caught… I did 15 years.