The band plays to a nascent audience.

Black River Falls, WI – Ya gotta love salient coincidences, those ones that punctuate life in ways that might tempt you to ascribe to them some deeper more transcendent meaning. On Thursday morning, as we rolled into Black River Falls, we saw hanging above the highway a banner announcing that weekend’s Jackson County Fair, which last year I worked as a carnie for Wenzel Amazements, an experience that in part inspired this current endeavor.

Like the Wenzels I was back in Black River Falls to work a festival, a different one being held roughly 10 miles beyond the other side of town. There, on a private campground comprised of many acres covered with sprawling conifer forest, people from as far as St. Louis came to celebrate for three full days the birthday of the late-Grateful Dead guitarist Jerry Garcia.

I was at the gathering to sling deep-fried donut balls and flip a profit like the dozen or so other vendors who turned out with their massive inventories of tie-dyed shirts, tapestries, hemp jewelry, hula hoops, gems and drums. I had food vended years ago and my time with the Wenzels led me to realize the big potential of simple ideas on the festival circuit. But that simple, easy idea eluded me. Only after a friend dropped the idea of selling donuts on the road to fund her travels did I have a jumping point. Now here I was less than a month later listening to Grateful Dead covers while squirting from the depositor little ball-shaped donuts, a perfect treat to assuage the munchies.

Of the dozen or more vendors only one sold food, mostly burritos, tacos and sandwiches, a fact we figured boded well for us. By 11 a.m. that morning Daisy Dick’s Donut Ballz was open for business, the first batch of balls bagged and displayed and waiting for people to buy them.

Could it really be that easy?

The woman vending next to us told us Thursday would be slow. Indeed it was. But rather than fret, we kicked back and people watched. Scurrying around the grounds was a diminutive man with long graying hair tied behind his shoulders. We first noticed him upon arriving, as he hurriedly emerged from between a pair of buildings wearing nothing but the skin he was born in, his perfectly tanned appendage swinging side-to-side. We later learned he was called Naked Larry. The campground was a safe haven for nudists and, judging from the cages, crosses and stockades, BDSM play was a popular activity, as well. The camp also bills itself as neutral place for rival biker factions. A sign at the gate states that “all colors are welcome.”

For the most part, people kept their clothes on. One girl went topless, with pot leaves painted over her nipples. A heavy-set guy, presumably inspired by the other naked guy, too chose to strip down, his big tan belly supported by a stark white lower half. Another naked guy, this one with big mutton chops, wore only a belt in which he carried his cell phone that he at least one time bent over to retrieve after dropping. I’ve never seen so many heads turn away so fast.

Unlike Naked Larry, who has close relations with the camp and is well-known and liked by festival veterans, these other two cut pathetic figures. All weekend they strolled the grounds alone. It’s easy to meet people at these things, but nudity – at least male nudity – erects a barrier to forming new relations. I mean, no one is going to invite the naked stranger to smoke a bowl or share a beer. Who wants a bare butt on their chairs? You might think that if the crowd was put off by these two that at least they’d have each other. But that didn’t seem to be the case. As far as I could tell, they didn’t speak and never stood near one another. Perhaps they too found mingling with a naked male a tad discomforting.

As Thursday wore on, it became clear that people weren’t buying donut ballz en masse. A few here and a few there, but not at the volume we had wished for. Anita, the woman vending next to us, said things would pick up on Friday and Saturday, which they did. It was clear that the campgrounds were filling up. At any moment I expected a stream of dancing people to fill the concert area. Last year, Anita said, only 600 people showed up.

The goal from the onset was to sell 200 bags of Daisy Dick’s Donut Ballz, which seemed like a reasonable benchmark. But unfortunately for me, and many of the other vendors, those people we waited on never came. 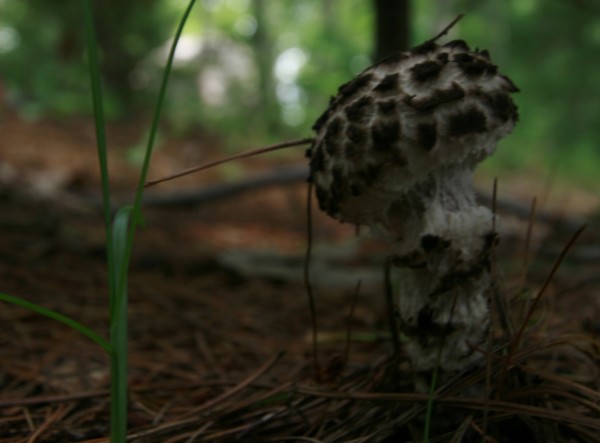 The first problem lay with the lay-out of the festival. The concert area where the vendors were placed was open field which the sun beat on oppressively. With the campgrounds nestled in the shady forest behind the stage, there was little incentive for attendees to vacate the comfort of their camp for the brutal rain of sunshine. The music, which during the day was largely low-energy acoustic balladeering, traveled easily into the woods. To everyone’s dismay, the concert grounds remained virtually empty until darkness and the day’s main act compelled these glassy-eyed creatures to emerge from the forest.

Then there was the crowd itself, which never achieved the mass necessary to sustain to the vendors, something the festival organizer alluded to on the final night in his profuse but shaky thanks to the vendors. Because attendees were so dispersed, gauging their numbers was difficult, but I’d estimate the crowd numbered less than 1,000.

The paltry weekly pay I earned last summer working for the Wenzels was double what I earned at this gathering. But we packed up our shop with few regrets and some lessons learned. First, donut balls aren’t enough to carry the day. While we did sell nearly 50 bags, those sales came primarily in the morning. We also lost money by not offering coffee, which was in high demand.

In all, Daisy Dick’s Donut Ballz was well-received. Naked Larry bought donuts each morning. People loved the name and Anita, who has worked festivals for nearly a decade, said she’d never seen such a simple food set up. She applauded our concept and suggested we make more use of our deep fryer by adding a couple substantive items. She gave us the names of a few upcoming festivals she’s working and encouraged us to secure spots. “I lost my ass the first time I came out, too,” she said. “But it will pay off if you keep at it.”

Keep at it we will. Already we’ve got new designs and food stuffs to offer at next week’s festivities. While tearing down our spot yesterday morning, I was, in spite of my losses, invigorated by the possibilities that lay ahead. It was a gloomy morning and few of the other vendors seemed as pleased with their weekend as I was.

One was particularly incensed as her boyfriend decided to party all weekend rather than work. That morning he snored loudly from inside her vending booth. The day previous he let a little too loose, whooping it up all day into the night. At some point they began arguing and he ran off into the forest. Later, she spied him by a fence stripping out of his clothes after shitting himself. She told him he had to sleep outside. His strange snores attracted one woman who wondered if there were chickens inside the tent.

And with that we were off, back to Madison to figure out the next leg of this latest adventure. As my fellow carnies were answering work call for the final day of the Jackson County Fair, we rolled out of Black River Falls. I imagine they had more than a few crazy stories from their weekend here.

For a moment I thought of swinging through, to say hello, how’s it going, but that life seems like so long ago that I would’ve felt a little weird just showing up. Plus the Wenzels I imagine remain unhappy with the article I wrote about them last summer, even though the experience shaped all of our lives in ways both small and large. They taught me a great deal about many things and, rumor has it, they took some cues from my series of posts last summer to become better, more empathetic employers.

Some things are best left alone.

Here are some outtakes from the Grateful Garcia Gathering.