Today is Labor Day, which for many of us spells the end of summer. School begins, vacations end and we begin prepping ourselves for the trappings of winter. I’m spending the day in Madison, WI, waiting for repairs to be made on Purple Thunder, my trusty van that appears to have a rogue wire grounding out somewhere. In the last three weeks I’ve had to replace a battery that was less than a year old, as well as a fuel pump that fizzled out. I was on my way back to Philadelphia when my brake lights, blinkers and speedometer puttered out in Illinois, the same symptoms that preceded the aforementioned repairs.

The mechanics didn’t believe me there was a problem underlying the issues with the battery and fuel pump, which, it turns out, were merely symptoms of an as-yet undiagnosed problem. I was assured that nothing else was wrong both times I brought it up. The mechanic tells me after paying almost $900 and again asking if he’s sure the problem is fixed, “We’ve been in business all these years for a reason.”

Yah! Because everyone has to keep coming back.

Just more than a week after the last repair, I’m stuck in Madison, WI, waiting to get home to Philly, where I was supposed to return to work tomorrow. So much for that. Good thing my boss is awesome.

Summer, too, is over for The Feral Scribe, which went live on April 25 of this year. It’s strange to think that was just over four months ago. I’d like to thank everyone who has followed my adventures and supported me by linking to this site and encouraging others to check it out. An extra special thanks goes out to those who’ve provided financial support by donating to The Feral Scribe. Your gifts and generosity are appreciated in more ways than you’ll ever know.

A shout out is also in store for my uncle Mark and aunt Linda, whose assistance, encouragement and feedback this summer have been paramount. I can’t thank them enough. You can check out their blog, Each Little World, here.

There are a few updates I’d like to announce. First, for those outside of Madison, WI, who enjoyed the Carnie Chronicles series, here is an article I wrote about the carnival for Isthmus newspaper in Madison, which was published in August. The article prompted an invite to field questions from creative nonfiction students at UW-Madison in November.

I was also interviewed by Noel Benedetti, who writes about circus, sideshow and carnival history and culture at her site, HeyRubeCircus.com.

Topping it off, The Feral Scribe was named the #1 Travelogue in North America by GuideToOnlineSchools.com.

The summer has certainly ended on a very high note.

The website in the coming months will undergo some cosmetic and functional changes, the addition of a blog roll among them. Should the site have something it currently doesn’t? Something about it you don’t like? Shoot me an email if you think so. Feedback and suggestions are always welcome. After all, I don’t visit the site. You do. 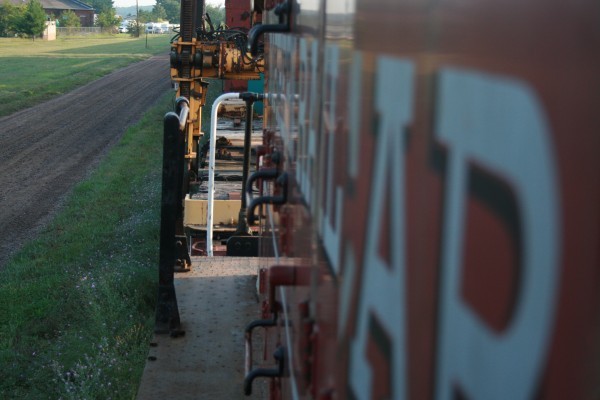 So, is this the end of the road for now?

Though I’ll be working through April, plenty of time will exist for weekend adventures and mini-trips, so don’t go anywhere! Purple Thunder is down, but not out. Over the next six months I’ll explore the urban wilderness that is America’s mid-Atlantic region.

More images from the train cars behind the Railroad Museum in Spooner, WI.