Grappling with Rain, Wristbands and Racism | The Feral Scribe

Grappling with Rain, Wristbands and Racism | The Feral Scribe

There’s something spooky about a deserted carnival midway just before a storm hits, the canopies whipping in the wind, their colors all the more salient against the darkened sky, and the Carnies huddled beneath the awnings of the game carts waiting for the rain. We hadn’t even begun selling wristbands Thursday when the tornado sirens began wailing in the distance and in the far off sky we noticed the inky black storm clouds rolling our way.

An accurate forecast was elusive. Even though everyone was listening to the same emergency broadcast, we all heard different things. It’s going to pass us. It’s coming straight toward us. It’s moving at six miles per hour. It’s moving at 40 miles per hour. It’s a big storm. It’s a small storm. The only certainty was that the black sky was coming at us.

Most of the girls ran toward the bathrooms, which were locked for the festival. Others professed that if a tornado came, they preferred to die in their bunk while smoking a bowl.

Some time passed and the sun peeked through the clouds. We reached a consensus that it was going to pass us by, that WaunaFest would go on. Then it poured. When it stopped, we waited to see if the rain would hold. Being payday, everyone had a fridge full of beer they were eager to drink. But carnival goers then began arriving, so we returned to our rides. Miraculously, the rain came even heavier the moment Corina kicked on the generator and everyone ran back to stand beneath the Dozer’s awning. There we awaited word from the festival committee about how to proceed, which didn’t come for some time.

Close to 30 minutes passed before Corina, who’d been working through the rain most of this time, told us we had the night off, but first we had to put our height sticks in the Dozer, where they���re kept at night. My roommate, now officially Black Nate, volunteered to fetch my height stick since I’d let him borrow an extra poncho I had, sparing me a long, wet walk to the Fun Slide. 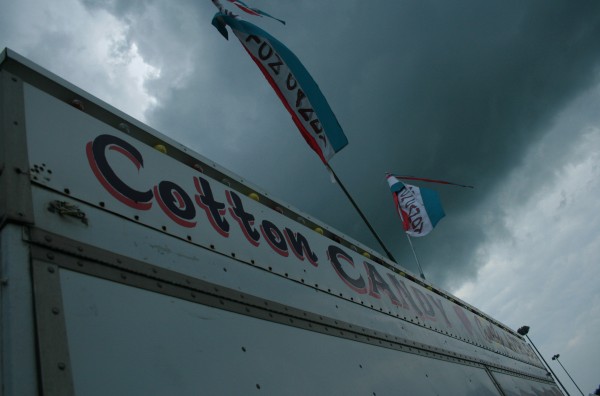 Living, working and hanging out with the same people for weeks on end might sound tiresome, but even privacy and change are easier than you’d think around here. During set up and tear down you’re working on a ride with just three or four guys, if that, with distance between you and everyone else. In the off hours, some guys hang out in their bunks. Others venture into town. Some, like Tony, make the rounds, meaning he’ll stop by each bunk, hang out for a while, then move on. During operation hours, each Carnie ventures toward his or her ride, which I like to think of as autonomous little kingdoms where each Carnie is King.

Once, Jeremy climbed atop the Funnel Cake stand and, while raising the flag like Iwo Jima, yelled, “I declare this Funnel Cake Land!”

But ruling a kingdom isn’t all that it’s cracked up to be. In the beginning I liked working the rides best, but now it’s set up and tear down I enjoy most. I think most other Carnies agree with this. Most don’t have great customer service skills, which is fine, because none are that expected. As long as you don’t swear, aren’t too rude or do anything untoward, things will be okay. Sometimes that’s hard, especially during wristbands, those $15 bracelets that mean unlimited rides for four hours. Every Carnie deals with those kids who get off the ride just to get back on it. Over and over again. They’ll ride and ride dozens of times and as much as you want to tell the kid to scram, you can’t.

In this regard, I’m fortunate to work the Fun Slide. The fences are set up as such that riders must exit in order to re-access the steps. During wristbands, I simply keep the gate unlocked. I motion the kids in, point to the gunny sack and watch them come down. When they try to hand me the gunny sack, I point to the fence, indicating to hang it back there. I barely have to speak at all!

One thing everyone likes is not having to tear tickets. I don’t know why tearing tickets is such a chore, but the only redeeming quality wristbands have is that you can simply open the gate and let the kiddies run in. They eliminate a thought-requiring step.

When a Carnie makes a mistake or does something stupid, it’s because he’s still “in wristband mode.”

Yesterday, Harley told us that Black Nate is the only black he’s seen work here that’s worth a shit. When Nate started a week after I did, I was a little nervous about how it would play out. After arriving in Waukesha, my second day with the carnival, I had breakfast with one of the younger guys. I was telling him about Philadelphia. He said he hates cities, because “I don’t like niggers.”

It had been a long time since I’d heard that word used that way, in person, not to mention over breakfast, but it wouldn’t be the last either. Taylor, who everyone is adamant they’d never fuck no matter how drunk they get, has had her entire womanhood reduced to being a slab of “nigger meat.” Many of the guys have claimed they’d never even touch a girl who had slept with a black guy.

Brian, the pranksta gangsta from Burlington who quit after Corina banished his sex offender friend from the camp last weekend, got Nate the job with the carnival. Brian, who is white, had no qualms with calling Nate, “My nigga,” as in, “You’re my nigga, dawg,” which he always affirmed with a hand shake. Nate hasn’t indicated his thoughts on this, thoughts I suspect he suppresses so as to avoid conflict. The only time we’ve seen him upset is when on the phone with his baby’s momma. But he has to be aware of the chatter. In fact, the sheer volume of racial jokes bantered about make me think it’s impossible for all of the N-bombs to have bypassed his ears.

Because everyone likes Nate – he’s easy to be around, thoughtful and works hard and well – there’s a bit of postscripting these days to the comments and jokes, usually a sophomorically trite distinction between “blacks and niggers.” Nate isn’t a nigger, they say, because he’s not like other blacks who are lazy, loud and prone to fighting or stealing.

I don’t use the word nor do I enjoy hearing it, but it doesn’t make me cringe, either. That a single word possesses the singular power to tap the full spectrum of human emotion fascinates me greatly. Only when considering its grotesque origins and the level of subjugation it still imposes to this day do I feel guilty for finding any beauty in its vileness. I don’t believe for a minute that any of those I work with are filled with the level of hate the word implies. Most of those who’ve used it listen to hip-hop, have black friends, and would never think of assaulting Nate’s dignity on account of his race, except for when it comes to using the most racially violent word to ever enter the lexicon.

Even the kid who professed to me his hatred of blacks harbors a fondness for Nate.

What bothers me is that they see Nate as an exception to his race. But in defense of the indefensible, the blacks being referred to, that the Carnies complain about, are the blacks wrapped up in the gangsta culture, the thugs, the blacks they typically encounter on the streets and in jail. Culturally, the differences here are substantial, as sociologist Elijah Anderson articulated in his seminal essay entitled, Code of the Street. Because Nate isn’t a thug, doesn’t use a lot of ghetto slang and is over all an agreeable person, people like him. I suppose on some level this is progress.

Maybe one day I’ll have the nerve to ask Nate his thoughts on this. But how do you even bring up such a topic without it being awkward or becoming explosive?

Those of you who’ve encouraged to me stay with the carnival a little while longer will be happy to learn that I’m keeping with it until Aug. 17.