Highway History: Myself, a Marker and the Massacre | The Feral Scribe

Highway History: Myself, a Marker and the Massacre | The Feral Scribe

Near the confluence of the Bad Axe and Mississippi Rivers, outside of Victory, WI.

Victory, WI – The nation’s highways are dotted with commemorative plaques, memorials and points-of-interest. Wisconsin alone has 520 such markers, each offering a tidbit of state-approved history. Many of these markers are tributes to obscure local figures, events or milestones, significant to few beyond the civic boosters who raised the money for their creation. Most are forgotten as quickly as they’re read. But every once in a while one will arouse the imagination and compel you to contemplate an unimaginable history.

Here, just south of Victory, Wisconsin, a tall tombstone-shaped marker with a weathered inscription summarizes two bloody days of fighting that occurred here – at the confluence of the Mississippi and Bad Axe Rivers – in early August 1832. To call it fighting is putting it mildly. Hockey players fight. This, on the other hand, was a massacre, carried out by men who would later be honored with counties, cities and parks that bear their names.

The marker itself is neutral, providing a statistical snapshot of the atrocity. “Hard fighting… 1,200 white soldiers engaged. 17 killed. 12 wounded. Of Indians. 150 shot. 150 drowned. 50 taken prisoner. 300 crossed of whom 150 were killed by Sioux instigated by Gen. Atkinson. Of the 3000 [Indians] that crossed the river from Iowa in April 1832 not more than 150 survived to tell the story of the Black Hawk War.”

No mention of the massacre or the genocidal racism that inspired it.

That story goes something like this: In April 1832, Chief Black Hawk led of a band of some 3,000 Indians – warriors, as well as women and children – across the Mississippi from Iowa into Illinois to reclaim ancestral lands his tribe had lost to dubious treaties and the discovery of minerals. (Though the plaque says 3,000 Indians crossed the river, most accounts put the number around 1,000.) More Indians allied with Black Hawk’s band as he pursued negotiations with Illinois’ territorial governor. When talks broke down, the governor dispatched a militia that eventually killed three emissaries sent by Black Hawk to broker a truce. After twelve white men were killed in the ensuing battle, rumors that “2,000 bloodthirsty warriors were sweeping all Northern Illinois with the bosom of destruction” gripped the area.

Over the next three months, Black Hawk’s band, made up primarily of Sauk and Fox Indians, was pursued through northern Illinois and southwestern Wisconsin by the United States Army and various militias eager to see the Indian rebel dead. By July 21, when Gen. Henry Dodge caught up with Black Hawk’s band at Wisconsin Heights, the warrior chief had decided to flee with his people back across the Mississippi into Iowa. Tired and without food, more were dying each day from exhaustion and starvation. Black Hawk’s band sustained heavy losses, but the warriors were able to hold the soldiers back long enough to allow women and children to cross the Wisconsin River.

The Battle of Wisconsin Heights, considered the penultimate battle in the Black Hawk War, was also the prelude to the massacre at Bad Axe. Dodge, after leading a bayonet charge against those warriors that remained, suspended fighting until the following morning, giving Black Hawk and his surviving warriors time to escape across the river. At dawn, a fellow chief named Neopope, yelled out from atop a knoll across the river to militia leaders. He spoke in the Winnebago (now Ho-Chunk) language, but the Winnebago, who allied themselves with the militias, and took some 40 scalps during the battle, were no longer present. The white men couldn’t understand what Neopope was saying, and the chase continued.

It took Black Hawk and his starving, frightened band, eight days to reach the confluence of the Bad Axe and Mississippi Rivers, near where Highway 35 now snakes along Wisconsin’s western border. Many Indians, now numbering less than 600, made haste in crossing the river, escaping to Iowa, where they believed they’d be beyond America’s reach. Time was in short supply. Army soldiers and militia men were closing in on them by following their dead. On Aug. 1, the same day the Indians reached the Mississippi, Maj. John Allen Wakefield, wrote, “We… passed a number of dead Indians who had died in consequence of the wounds they received in the battle near the Wisconsin River.”

While some of the Indians managed to reach Iowa’s shore, many were killed when the Steamboat Warrior arrived shortly after and immediately opened fire. Black Hawk later recalled that men dropped at his feet. He waved a white flag that was ignored by the ship’s captain, who pounded the shore with canister shot until the ship ran low on fuel some two hours later.

With the Warrior headed south to Prairie du Chien, Black Hawk believed the band should go north, but convinced only 40 of his dying followers to flee with him. For the several hundred who remained, only in Iowa would their survival be assured. 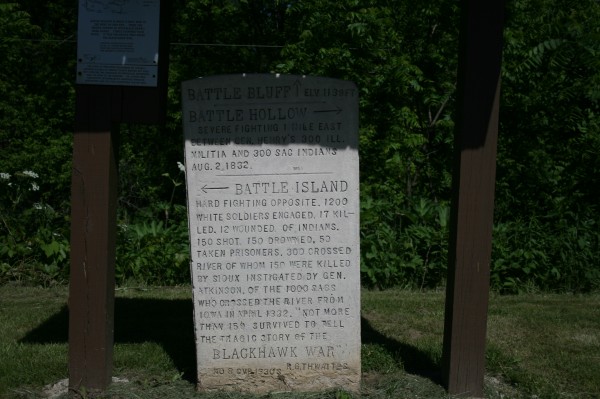 In the early morning hours of August 2, 1832, spies in from Gen. Henry Atkinson’s brigade heralded the discovery of the Indians’ rear guard. The Indians, Wakefield observed, fired upon the spies as they retreated toward the Mississippi, “until Gen. [Henry] Dodge, who commanded, began to kill them very fast.”

“They now found that they could not get away from us,” Wakefield continued, in his accounting of events published in 1834. “The only chance for them was to fight until they died.”

Wakefield’s assessment was correct: the Indians’ situation was hopeless. Gen. Dodge’s brigade was closing in from the east. The Steamboat Warrior, now refueled and on its way back to the mouth of the Bad Axe, prevented a southern escape. And in Iowa, where the Indians believed they’d be safe, Sioux Indians in the employ of the army awaited in the forest. Those that made the crossing a day earlier had been captured and scalped.

After discovering a trail leading to the Indians’ main camp, Gen. James Henry led the charge down the bluff and toward Indians’ warrior guard. A fierce bayonet and musket battle erupted between government forces and several hundred warriors. As fighting broke out, Wakefield recalled seeing women and children constructing bark canoes, many of whom ran into the river and drowned.

Eager to end the war, soldiers from other regiments joined Gen. Henry’s ranks. “They all joined us in the work of death – for death it was,” Wakefield wrote. “We were by this time fast getting rid of those demons in human shape.”

Orders were given to shoot anyone who fled or tried crossing the river. Indians who escaped to one of the river’s many willow islands were came under siege by the Steamboat Warrior. Of those who didn’t brave the water, some tried hiding in the tall grass and thick brush. Others buried themselves in the mud and sand, “leaving just enough of their heads out to breathe the breath of life.”

The nightmarish assault lasted eight hours. Of the 500-plus Indians at the mouth of the Bad Axe River that day, approximately 150 survived and were taken prisoner. The Sioux collected on the 68 scalps and 22 prisoners they returned to the local Indian agent.

Reflecting on that day, Wakefield is boastful.

“We killed and wounded a great many of these wretched wanderers, who have no home in the world, but are like the wild beasts more than man – wandering from forest to forest, and not making any improvement on the natural mind,” Wakefield wrote. “Putting together what were killed in the two battles, we must have destroyed upwards of four hundred of these unhappy and miserable beings.”

Once the survivors were rounded up and examined, they were asked what Neopope talked so long about atop the knoll following the battle at Wisconsin Heights. “They stated he was telling us… that they had their squaws and children with them… that they were starving and unable to fight us… that if we let them pass over the Mississippi, they would do no more mischief,” Wakefield wrote, betraying no emotion. “But here he was mistaken… There was no one among us that understood the Winnebago language.”

Many of the men who fought in the Black Hawk War went on to prosperous political careers. Henry Dodge became Wisconsin’s first territorial governor, a Congressman and had a state park and town named after him. Another Wisconsin town is named after Gen. Henry Atkinson. Maj. John Allen Wakefield served in the U.S. House of Representatives, and, in a case of moral irony, fought to keep slavery out of Illinois and Kansas.

As for Black Hawk? Well, he was paraded through the eastern cities after his surrender not long after the massacre. Within a year, his autobiography made him a bestselling author. In 1838, he died in southeastern Iowa.

And the mouth of the Bad Axe River? Almost 179 years later, it’s difficult to imagine such horrors as those that occurred here, though similar things continue to happen routinely around the world. The wilderness here looks much the same as it did then, with grand bluffs spared by the glaciers, overlooking both rivers and with the forested hills of Iowa still within reach. The Indians are long gone. The only ones you’ll find around here are those whose bones are occasionally uncovered by construction crews or gardeners. The locals are superstitious about such findings, and tend to return the remains to their graves.

It’s probably fair to say that not many know much about the massacre that occurred here, if they know about it at all. And that makes me a little sad. Such things should not be forgotten. Then again, were it not for a weathered marker and a bit of chance, I wouldn’t have known about the Massacre at Bad Axe, either.