Hobbled in the Mountains: Purple Thunder Narrowly Makes it Home | The Feral Scribe

Hobbled in the Mountains: Purple Thunder Narrowly Makes it Home | The Feral Scribe

Setting out on an 850-mile road trip in a vehicle that’s been in the shop three times in just as many weeks might seem like a fool’s errand, but I needed to be back in Philadelphia by Sunday evening so I had little choice. I’d already missed an entire work week due to two fuses that, for reasons not even the mechanics can figure out, keep blowing. The week previous I made it as far as Shannon, Illinois before they popped. Sixteen fuses and $1,600 later, I was assured that all was good in the hood. And all did go as well as expected – for the first 550 miles.

I woke early Sunday morning at a travel plaza outside of Pittsburgh on I-80 east, where I had pulled off the night before after driving almost 14 rainy hours. To avoid paying tolls, I took the byways, highways, back roads and small stretches of turnpike, a slower, but more scenic route. There’s more than a little irony in me driving along these very rural roads in an unreliable vehicle with little money. At the trip’s onset in April, I intended to avoid the Interstate as much as possible, but it seemed as though I never left it.

It’s fitting that summer for me would conclude with a white-knuckle adventure through the narrow ribbon of a road winding through Pennsylvania’s rain-soaked, fog-cloaked Alleghany Mountains. It’s been this way every road trip I’ve taken. On my first road trip, we overheated in Missouri on our way to New Orleans before losing the van on our way back from New Orleans, again in Missouri, when the trooper discovered there wasn’t a valid license among the four of us.

During an eight-day, 5,400-mile excursion through the Dakotas to the Pacific Northwest, down the Pacific Coast into Arizona and back up to Colorado, my 1981 Toyota Celica took a beating, but kept running. First, an electric short caused the headlights to flip up and down, even when the car was off. Then we got a flat at 3 a.m. outside of Flagstaff, Arizona. Then, outside of Denver, a belt snapped and I lost my power steering. But we made it. And probably could’ve made another in that old Toyota had not someone slashed its tires, followed by my roommate and I taking baseball bats to it one drunken night.

And the list goes on. A school bus I hopped on in Indiana after my friend gave away his Toyota later broke down in, well, Indiana. The last van I bought, a 1985 Volkswagon Vanagon, suffered a series of electrical failures before the brake lines blew. When those were fixed, the vehicle wouldn’t start. Go figure.

My ex-girlfriend’s car overheated during our move to Philly, and continued to do so until the head gasket finally blew one night as I was coming home from work during the first week at the new job it took me four months to find. The same job I was a week late in returning to now. Luckily, my boss is the shit. Understanding to a fault. Last winter and spring, she and I rode together on the train after her husband took her car after his truck broke down and my ex-girlfriend moved out, taking the car with her. 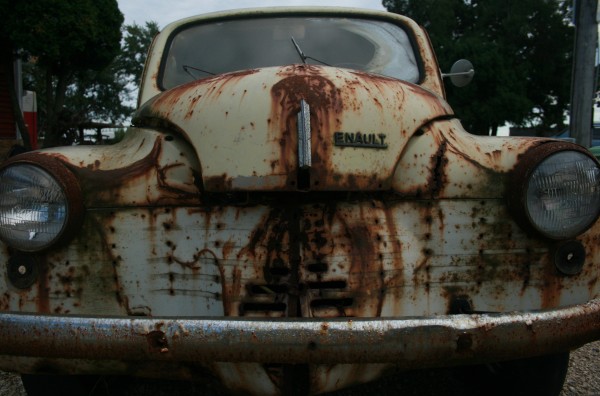 At the travel plaza, I brushed my teeth, got coffee and gas, then set out on I-80 east toward exit 161, from which point it was again back roads and remote highways. The drizzle was heavy, with a wafting mountain fog so intense visibility wasn’t much more than a several yards. About 20 miles before my exit, I pulled onto the shoulder of the Interstate to take some pictures. When I returned, I heard the ominous buzz of flashers on the fritz. The fuses, which had to that moment held, had blown once again, leaving me without blinkers, a speedometer, flashers or brake lights. My stomach knotted up. My GPS showed I was still 300 miles – or six hours – from Philly, a pretty long haul when you fear your vehicle will shut down at any moment, as Purple Thunder did twice in Madison. My goal at that point was merely to get within 100 miles of the city, the distance AAA will tow me for free.

Another thing lost with the blowing of these fuses is the gear regulator. Without. It. The. Van. Accelerates. Very. Hard. Until. Suddenly! It pops into gear. Then. It. Does. The. Same. Thing. Until. Popping into the next. Once I’ve hit 25 mph, it’s smooth sailing. But it can’t be good on the transmission.

Like this, with no gear regulator or brake lights, I drove for hours through the dark, misty morning on the lightly trafficked highways. But as the day wore on and the closer to the city I came, the denser the traffic grew. I had to use the restroom like nothing else following the mega-cup of coffee I had tossed back near Pittsburgh, but I didn’t dare stop. So long as I was still moving eastward, things, I felt, were going to be okay. Using my tail lights as impromptu brake lights, I made it back without incident, with everything intact aside from the fuses and my nerves.

Now comes the difficult part. Do I cut my losses and sell Purple Thunder or drop more dollars into fixing a problem that at this point seems expensively unfixable? Aside from this problem, the van is mechanically sound. It was well cared for by its previous owners and is a perfect vehicle for The Feral Scribe. It’s just one of those flukey things that happen, as happened with my Toyota and Volkswagon. Both of them I sent to the scrap yard. With Purple Thunder, the decision isn’t so easy.

I’m just grateful this problem arose at summer’s end, rather than its beginning. But looking back on my troublesome history with motorized vehicles, I’m beginning to think I’ll never have a vehicle I can rely on completely. Perhaps that’s just the nature of vehicles. You drive them and eventually they break. But why can’t mine break in ways that are easy to fix? That’s one I cannot answer. Is it fate? Karma? Some strange electric discharge from my fingertips that makes these vehicles go bonkers?

Who knows and who cares?

The short of it is that it’s life, my life, and these are the things with which I must deal.