At Angelo’s, we ordered “the biggest slice in town.” Coming in at 18-inches, was nearly the length of my forearm.

Baltimore, MD – We rolled into Baltimore just after 6 p.m. on Friday, arriving at my friend’s home in the Hampden section on the city’s northwest side. Kendra, an old friend from Madison, moved to Baltimore 18 months ago, where she landed a nice job and has made enviable inroads into Baltimore’s comedy scene. She’s a comedienne, you see, and I’ve been meaning to visit and catch a performance. She’s insanely funny, and when she’s on, she’s on. But as it happened, she had nothing booked that weekend so instead we went out on the town.

After grabbing dinner, we landed at the Lithuanian Hall for a 60s mod party. All night the deejays spun old 45s of 60s mod tracks and obscure B-sides. In the background, topless women from grainy 60s film reels danced on the flat screen. Several hours and Utenos (Lithuanian beer) later, we headed back, but not before stopping at 7-11 for taquitos, a terrible idea. That morning my head pounded as I sprinted to the bathroom to vomit up a foul stew.

A few hours later, my sidekick, Sarah, and I left to peruse the The Avenue in search of coffee and breakfast while we waited for Kendra. 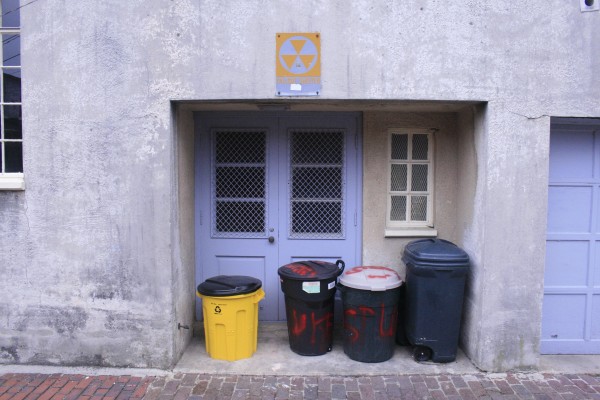 Is it against code to block the entrance to a fallout shelter? Several buildings had a fallout shelter designation. Someone suggested it may be owed to the city’s proximity to the Abderbeen Proving Ground, where top secret weapons are tested. Maybe its a remnant of the Cold War, when it was feared the Rooskies would nuke D.C. Perhaps it was a little bit of both.

After finishing her Cure for Diabetes walk, Kendra joined us as we chowed on gingerbread pancakes at Cafe Hon, a trendy eatery on West 36th Street,  or The Avenue. We talked about the food – liked it, didn’t love it – which led to her telling us about the protests that erupted outside the cafe in December. “People were really pissed,” she said. “I boycotted this place for a while.”

The diner’s proprietor, Denise Whiting, had trademarked the word ‘hon,’ a word as much a part of Baltimore’s cultural identity as its treasured blue crabs.

But I didn’t get it at first. People really were protesting over the word ‘hon?’

As in, “Welcome to Baltimore, hon?”

In Baltimore, hon is a term of endearment, but it also refers also to a specific type of woman, a Hon. Baltimore Hons, depending on your source, were renown for their bright print dresses, thick-rimmed, pointy glasses, beehive hairdos, strong family values and formidable Bawlmerese.

Baltimore writer William Tandy, in a piece on the ‘hontroversy’ wrote, “[For natives] the word, as much as anything, harkens back to their youth. The city of their mothers, sisters, aunts and grandmothers – strong predominantly white working-class women whose memories forever call them home to a past as resilient to the erosive ravages of time as the marble steps of an East Baltimore rowhome.”

Filmmaker John Waters popularized the Hons by exaggerating their eccentricities in movies like Pink Flamingos and Hairspray. His 1998 film Pecker was filmed in Hampden. Like Denise Whiting, Waters isn’t from the neighborhood and has his share of critics, too. He’s a semi-regular, patronizing it’s seedier bars and hideaways. Though he has similarly co-opted Hampden’s traditions and identity, earning millions in the process, Waters engenders far less hostility. Then again, co-opting one’s history is one thing, stealing it is another.

But residents didn’t know Whiting has trademarked the word until it was reported that the Maryland Transit Association had paid her a licensing fee to use the word on promotional materials. The outrage was immediate, and a fierce debate took hold over whether a person can own a word. There were protests and boycotts of Cafe Hon, and two other businesses Whiting owns on the block.

Whiting only made things worse, telling a Baltimore Sun reporter that people were mad simply because they hadn’t thought to trademark it first. She followed up with a threat to sue anyone who infringed her mark. Her lawyer later clarified that people could speak the word, but couldn’t use it commercially.

Following breakfast, we ventured to a local bookstore where Kendra showed me a ‘zine dedicated to the controversy. Hon: Past, Present and Future is a collection of fun and thoughtful essays about what the word means to Hampden. Here I found William Tandy’s re-cap of the the ordeal. Other essays had titles like, I Married a Hon!, This is Hampden, Not Cafe Hon Town and Dethroning a Self-Anointed Queen Bee, which begins with, “Long before Mr. and Mrs. Whiting conceived the narcissist they would name Denise…”

Friday night and the Diabetes walk had caught up with Kendra by early afternoon. While she napped, my sidekick and I ventured out to explore Hampden a little more. The neighborhood origins go back to the early 1800s, when housing for the area’s mill workers was in high demand. Labor unrest marred the first half of the 20th century, with several strikes broken with violence. By the late 70s, the last of the mills and factories closed their doors and Hampden succumbed to drugs, poverty and crime.

In the early 90s, a wave of artists, writers, actors and other creative-types began re-seeding the area with new energy and money. In Hampden, Whiting saw a business model and in ‘hon’ she found a brand. In 1992, she opened Cafe Hon, followed by the Hon Bar, Hon Town (a novelty shop). Eventually she launched the annual HonFest and ultimately trademarked the word.

In Hon: Past, Present and Future, writer Caryn Coyle puts it this way, “We’re all Hons here. No better no worse than the next. We do not discriminate. We are in this together, hon, trying as best we can each day.

“We persevere in spite of what piles up against us – unprecedented amounts of snow, insufferably hot summers, a shocking murder rate… The word hon is short for honey. Sweet. Thoughtful. Welcoming. The woman who has trademarked hon is none of these.”

I felt a little bit bad for eating there. 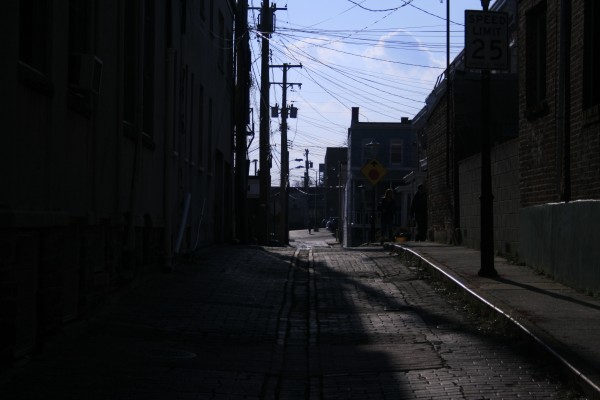 I love alleys, and Hampden has a ton of them.

I liked Hampden from the moment we pulled up. It’s a lot how I expected Philly to be, warm and inviting. As we walked along The Avenue, we saw a large unfinished painting in an alley. I took a picture, when, from nowhere, the artist appeared and invited us into his basement studio. His name was Matt Muirhead. While living in Tokyo, he met a girl who worked for a Japanese NGO that sailed from country to country. She invited him to tag along and he became the ship’s resident artist. Once back in the states, opened a studio, where he’s preparing for an upcoming exhibit.

He gave us a painting.

You can learn more about him here.

Kendra texted as we exited, telling us to head back. But she was still getting ready so we stopped off at Angelo’s, a corner pizzeria that claimed to have the biggest slices in town. They weren’t lying. Wrapped in tin foil were two 18-inch slices of pepperoni, with crust so thin you had to eat it with a fork. Eating pizza with utensils is a whole different meal entirely, so it was kind of a let down.

Aside from that, it was a-ight.

Kendra and her roommate scooped us. The plan was to go clubbin’. The roommate has a really interesting government job that affects all of your lives (U.S. residents only), but I didn’t ask if I could write about it so I won’t say what that job is. She drove us the old sections of Baltimore, en route to the Polish Home Club for live polka, Coor’s Light and beer nuts.

The club brought in a very old crowd, the last of the neighborhood’s Polish descendents. Many of the gentlemen I suspect led very interesting lives, like the ex-French Foreign Legion soldier we met. Many of the women, with their still formidable Bawlmerese, I could easily imagine as Hons.

Their children have moved away, and many of them have, too. Anyone who has seen The Wire has an understanding of the drugs and corruption that still rot the city. But these expats return each Saturday night to mingle and dance at the Polish Home Club, probably one of the last vestiges in an area once governed by their traditions.

When the polka ended, we headed to a college-y part of town for karaoke and sushi. I don’t sing, but I do freak to some salmon and avocado. Kendra treated the crowd to a rousing rendition of Satisfaction (I Can’t Get No), and a few other jewels from history’s pop music playlist.

The night ended normally, with sound sleep. The next morning, we dropped Kendra off at her rock opera rehearsal, then headed north back to Philly, a city with many of the same problems as Baltimore, but with half the charm.