Indignities, Indolence and Injuries: All in a Day’s Work | The Feral Scribe

Indignities, Indolence and Injuries: All in a Day’s Work | The Feral Scribe 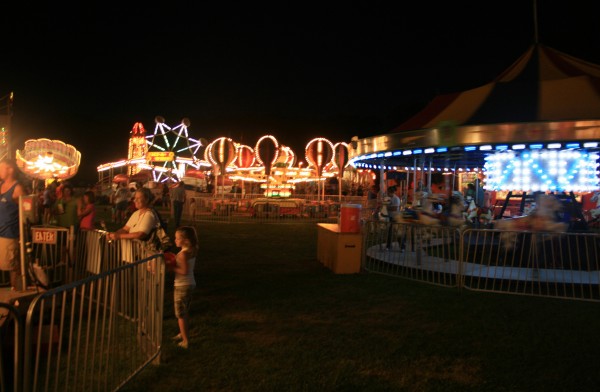 My first night with the carnival was mid-June. It was a Sunday, which meant tear down. I hadn’t given much thought about the work a Carnie did, aside from running the ride, so I was shocked to learn that every Sunday, after the carnival closes, the Carnies take apart and load up the rides. That night, for the first time, I helped tear down the Merry-Go-Round, and hated every minute of it. I was again on the Merry-Go-Round two days later, this time helping set it up. It was so hot inside the truck, and coming as it did at the end of the day, lifting, by myself, the 18 steel horses then setting them onto pillows so the hang rod can be inserted was something close to self-torture. I pretended I was a slave with nowhere to run.

A few weeks ago, in Monona, I realized how quickly I’ve caught on.  What surprised me more was that the more I learn about the rides, the more I enjoy building and taking them apart. The last three weeks, Nate and I have worked primarily on the Merry-Go-Round. We’re a good team because he knows how to fasten and raise the canopy and I’m better at remembering the proper order of the steps. Even the older guys no longer come over to ensure we’re doing things correctly. Here and there we have to consult Corina, like yesterday when, after hanging half of the horses, I noticed the platform wasn’t level. So work stopped while we jacked up the carousel to re-pin the jack stands.

It also helps that my seniority, to a degree, has been fast tracked. This happens in places with high turnover, but in the five weeks I’ve been with the carnival, 11 people have come and gone, including one very experienced and three hard-working, but less knowledgeable Carnies. Suddenly we have a lot of newbies and here I am, still a newbie myself, showing them how to assemble and take apart a Merry-Go-Round!

On Sunday, Nate and I showed Flo how to tear the ride down. Tuesday we showed him how to set it up. Flo’s first day was Saturday. He came with a girl, Sam, who he has a crush on. Monday night, Sam was making eyes at Craig, but ended up in Jeremy’s room. For more than an hour, Flo paced around camp wondering aloud, “Why is the door closed?” Eventually, he went to bed. Around 1 a.m., she slipped back into the bunk she shares with Flo.

The next day, as Flo handed me crossbeams we connected to the sweeps, I, noticing his slight accent, asked where he was from. “Romania,” he answered, “but I’ve lived here most of my life.”

His story goes that, as a very young child, he lost his father in a car wreck and his mother to a disease. He then lived in an orphanage until a pair of missionaries from Mineral Point, WI, adopted him. Though no one knew when Flo was born, they guessed at the time of his adoption he was around 10-years-old.

“See these,” he asks, lifting his shirt to reveal several deep scars running across his back.”I don’t know how I got these. I don’t remember. They beat you in the orphanage. When you turn 18, they throw you to the street. It isn’t a nice place.”

I like Flo, but he hasn’t had it easy so far. His accent renders him less intelligent than he actually is and his incessant chattering bothers more than a few of the guys. When he’s invited to hang out it’s on the condition he doesn’t talk so much. For some, talking is as involuntary as vomiting. When he invariably begins making noise, he’s politely reminded that he’s talking again. He apologizes and, for a time, quietly fights to hold back his words.

The sexual division of labor among the Carnies is what you might expect: the men do all the heavy lifting. While the Wenzlow girls will show-up any guy in both brains and brawn, the female help is all but worthless. Claire, a middle-aged grandmother, is the diva of the group, going out of her way to put some distant between herself and the rest of the Carnies. She often talks about the $200,000 house she lives in with her husband, wears gawdy jewelry that she believes gives a whiff of class and has the airs of someone who has mistaken herself important.

On the way back from setting up in Beaver Dam during our split week, the entire caravan had to make a stop because Claire wanted coffee. Under different circumstances, we might have been grateful, as many needed cigarettes and snacks anyhow. The difference is that the request would’ve been struck down had any of us made it.

What makes Claire so special?

Every once in a while, like today, she’ll clean the metal of greasy fingerprints or walk some fencing over. But within moments, while becoming less and less helpful, she’ll begin ordering others around, assigning tasks on a ride she knows nothing about. Taylor, in her early 20s, does this same thing, but differently. She’s often not around during the first day of set-up, going home to Milwaukee most Mondays and returning Wednesday morning, after work call and as set up is nearly complete. She works a refreshment stand, which it takes her the rest of the day to prepare.

But even though we lament Claire and Taylor’s indolence, the last thing we want is for them to be around. Like Claire, Taylor tends to hurl orders and commands, as if the job-at-hand hinges on her expertise alone. You’ll often hear Alison yell, “Taylor! Keep your mouth shut if you don’t know what you’re talking about.” Or if Taylor complains about the difficulty of a task, Alison will say, “It’s called work. It’s not supposed to be fun.”

Asked to judge their own performance, both Claire and Taylor would say they’re doing a helluva job, that they’ve earned every right to bitch.

Both women bitch, a lot.

So we just do our best to ignore them.

Redneck Scott, who took over the G-Force following Andy’s abrupt departure, had his first puker last Saturday. It was a teenager who, after the ride ended, ran off and vomited into a trashcan. His buddy then tried luring him onto the Hurricane. “I just threw up on the last ride,” he said. “I’m not going on that.”

Those of us sitting in the shade by the Tilt-A-Whirl laughed hard at this.

All of the big rides have puke buckets. David, who runs the Rock-O-Plane, has a special umbrella he sits under to shield him from surprises from above. He has lots of puke stories, like the time he was puked on twice in the same shift. “I’m unloading the buckets and this girl shows me her arm and says, ‘What’s this?’ I say, ‘Someone puked, now get out. I have to clean my ride.’”

We’re in Waunakee this week for WaunaFest. After setting up our bunks on Monday, Corina says, “Since I have everyone here… This is Waunakee. The people here aren’t always that friendly and they do watch us, so please be on your best behavior. Let’s show them that we’re not your typical Carnies.”

Waunakee is one of those cities where the police department runs the Carnies’ names for warrants. Last year, as the carnival was preparing to leave, one of the residents across the street shouted loud enough for everyone to hear, “The Carnies are leaving! We can unlock our doors!”

Such are the indignities that come with the job, indignities reinforced by Liz, the youngest Wenzlow daughter, who routinely makes disparaging comments about “the help.” “The help is the worst part of the job,” she tells me. 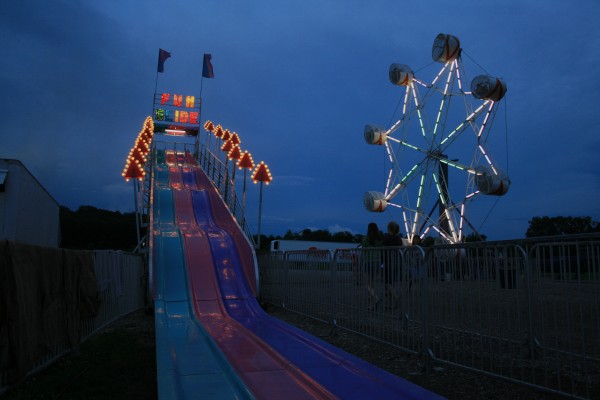 We haven’t had a day off since before July 4th weekend and it’s showing. Everyone is getting pretty dinged up. My legs are bruised and cut up and my left pinky finger is still sore after it was smashed between a trailer hitch and steel catwalk. Craig injured his back and not long ago his fingers lost some skin in the funnel cake deep fryer. However, Carl got it the worst after being bitten by the Iron Bitch, a.k.a. the Tilt-a-Whirl. His entire fingernail was torn off.

A full day off won’t come for another two weeks.

I’m leaving the carnival next week in Black River Falls. All the dates following are far, far north so it’s unlikely I’d find someone to come pick me up in time to be back in Madison by Aug. 30. I’m going to miss it, which is surprising since I thought I was going to hate it. But living, working and hanging with the same people for weeks will make a person feel a little sentimental about departing.

Yet part of me is glad I have the option of leaving.