It Was One Helluva Weekend | The Feral Scribe

It Was One Helluva Weekend | The Feral Scribe 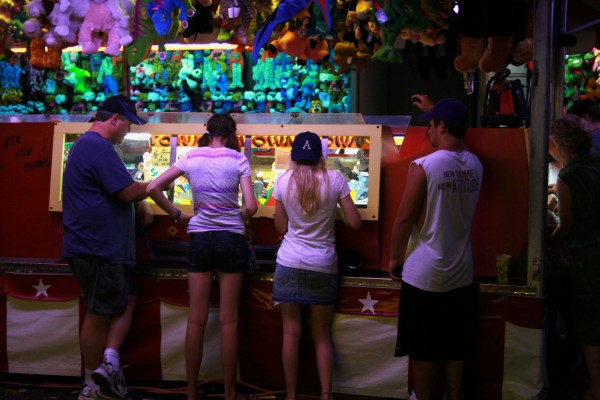 What makes a spot bad or good? Proximity to things – bars, stores, laundry mats. County fairs tend to be self-contained, with the local 4-H chapters selling burgers and ice cream, as well as food vendors other than those provided by the family I work for. Some spots, like in Wales, are so far out that the nearest gas station is close to a mile away with nothing but the rides and bunks on-site. The best spots are in the hearts of cities and towns, like Spooner in far northern Wisconsin, which last week celebrated 100 years of existence.

The week had bumpy beginnings. I’ve already written about my harrowing drive from Black River Falls, pulling a ride in a pick-up without brakes, then getting pulled over by a state trooper for an inspection. But that was nothing compared to the tectonic shifts that occurred in this little community of carnies.

Black Nate and Sam fought for much of the week, as did Tim and Danielle, who usually only work weekends, but because we were so far north, ended up traveling with us. Danielle didn’t like that Tim was spending so much time with Sarah and Sam, so she dumped him. He was going to leave, but when Jeremy quit, Tim took his bunk and avoided Danielle, who never hangs out with any of us.

On night, Sam spent most of the evening in Tim’s room, fomenting Black Nate’s jealousy. But Black Nate was cool about it, didn’t make a scene, but privately he and Sam warred over it. Of course, like girls do, she played dumb, pretending to not know “what the big deal is,” knowing full well that she’d achieved her objective in both hurting and humiliating Black Nate.

Thursday night, after the show closed, everyone went out drinking for Tony’s birthday. Around 3 a.m., when everyone stumbled back to camp, Black Nate overheard Tim talking about him to Sam, and the two came close to blows. The next day, Sam announced that it was official: her and Black Nate are dating.

In Spooner, the carnival was set up in a street right in the heart of town. Hanging around was a 12-year-old boy named Dougie, who everyday begged us to let him help us so we yelled at him a lot. The ground was particularly uneven, which made leveling the Tilt-a-Whirl track difficult. At one point, Dougie came over and asked, “Can I make a suggestion?”

“GET OUTTA OF HERE!” Carl screamed at him.

Dougie was fond of Flo, who, at 25, is a like a kid himself. They began hanging out and Flo ended up spending a few of the nights in Spooner at Dougie’s house. Dougie’s father, a big burly man with missing teeth, didn’t seem bothered by this arrangement. In fact, he came to the Fun Slide several times over the week to drop food off for Flo. One morning, just before work call, we were sitting around talking about how weird it was for a 25-year-old man to have sleepovers at a 12-year-old boy’s house.

“Why does everyone think it’s weird that Flo stays at my house?” asked Dougie. “Is it because he’s queer?”

We all kind of looked at each other, befuddled.

Flo was having a hard week. He missed work call numerous times. Plus, he developed a crush on Sarah, who has a crush on me, and whose game was next to the Fun Slide all week. But Flo works the top of the slide and I work the bottom. Because the Jack Pines Savage Day festival was incredibly slow, Sarah and I spent a lot of time talking, while Flo paced a top the slide, as though debating whether he should jump.

He didn’t believe her. Then Corina asked if he wanted a ride to the bus station. As we packed up our bunks, Flo packed up his things and walked off into Spooner with $80 and no cell phone. There is no bus station there, so Flo said he’d have to hitchike the six hour drive to Mineral Point.

Unless Dougie’s dad agreed to drive him home.

Being Tony’s birthday week, there was a lot of drinking going on, especially Thursday, when, at one of the local bars, there was a stripper, who was less topless dancer more farm girl from a county over. But Tony, who last year ended a five-year dry spell after shacking up with a 58-year-old obese woman, isn’t one to consider appearances.

A bunch of us went to the bar, where we watching Tony, by himself, sitting up close by the dancer, tucking dollar bills into her sports bra and coochie-cutter shorts. But this was no ordinary stripper. As Tony later noted, there is usually some distance the strippers keep between them and the objects of their tease. But as we stood there watching, the girl, hanging on a pole, threw her legs over his shoulders, wrapped them around his head and shoved his face straight into her thang as she gyrated her hips.

“I’ve been going to strip clubs since I was 16,” he said later. “I know all the moves by heart, but I’ve never in my life had that happen.”

That night, after she got fired, Tony implored her to join the carnival.

His calls to her went unanswered all weekend.

The Spooner festival was a bust, yet there was no lack of excitement at the Fun Slide. On Friday, a little boy stood outside the gate eating a big block of rock candy. “You’re lucky,” I said. “My mom still doesn’t let me eat candy.”

“My mom let’s me eat candy all of the time. My grandma says that’s why my teeth are brown,” he said, smiling widely to show me his little mouth full of rotting teeth.

Two teenage girls made repeated runs down the slide, racing and pulling at each other as they slid down, until the one nearly tore the shirt off the other, ripping her bra and exposing her breasts for the world to see. Then they stood at the bottom, next to me, as the one tried fixing the other’s bra, seemingly oblivious they were putting on a show. When it was clear they weren’t going to fix it I asked if they needed some tape, which seemed to do the trick.

After talking with one guy for a while about the carnival, he said, “You seem awfully intelligent for a carnie,” which, now that I know these people and have become rather fond of them, I took it kind of personally.

On Saturday, it rained, turning the Fun Slide into a water ride. With more rain in the forecast, I didn’t even bother wiping it dry after the first two downpours. Plus I was a little peeved that I received quite the talking to about the article I wrote for Isthmus newspaper in Madison, WI, about the carnival, which I’ll write more about later.

Really, I just wanted the weekend to end.

Each of the three days of the show were so slow and by evening on Saturday, everyone, after a long week of longer days and even later nights, was anxious for Corina to call it so we could get on with tear down. But the show went on and on and what was originally guessed to be an early night, turned into a 10:00 p.m. close, even though Corina knew that the storms were coming.

Not long after getting our tear downs on, a cold, heavy rain began to fall, yet we tore down the rides hurriedly in the night, our only light coming from the flickering and flashing rides themselves. Finally, after two hours, Corina called it, and we scampered back to our bunks for a few hours of sleep before the next day’s 7 a.m. work call to finish tear down, load up our bunks and make our way to the next spot.

Once there, I packed up my things and moved into Flo’s bunkhouse, where I’ll spend my final week with the show, giving Black Nate his space, and enjoying some of my own.