Killing Time in the Dells | The Feral Scribe

Killing Time in the Dells | The Feral Scribe 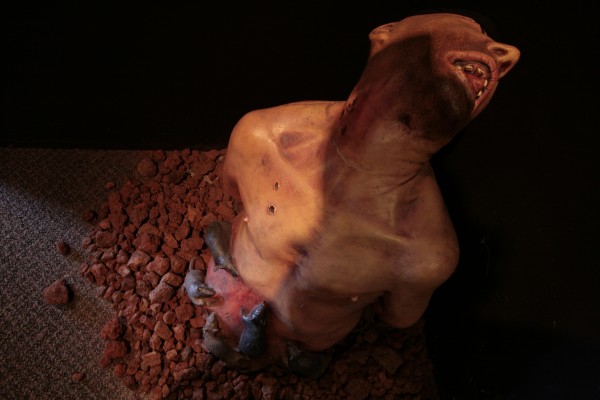 A wax depiction of a technique developed in ancient China where rats are encouraged to eat people alive.

Wisconsin Dells, WI – Normally I’m not keen on tourist towns, with their bubble-gummy aesthetic and overpriced fare, but there are exceptions, of course. Wisconsin Dells, where I spent my Fourth of July, is one of them. And though I’ve visited dozens of times over the years, it still holds a secret or two.

Located about 50 miles north of Madison, along Highway 12, the city, along with nearby Lake Delton, attracts more than five million visitors annually. Famous for its massive water parks, themed resorts, boat tours and natural beauty (glacially-formed sandstone gorges along the Wisconsin River), the Wisconsin Dells is a remarkably laid-back spot, having lured visitors seeking an escape from city life since the mid-1800s.

We left Madison early, hopping in Purple Thunder and heading west along Highway 12, which cuts northwest across idyllic Wisconsin farmland prior to meandering through the forested hills south of Baraboo. I always encourage visitors and newbies eyeing a trip to the Dells – as its locally known – to forsake the Interstate for this route instead. Not only is Highway 12 a peaceful and scenic drive, but it also offers an array of unique sights and destinations of its own, including Devil’s Lake State Park, Ho-Chunk Casino, the Baraboo Candy Company (home of the Cowpie), and Dr. Evermor’s fantastic steampunk-esque metal sculpture garden.

On this trip, however, the only stop we made along Highway 12 was to buy discounted fireworks – firecrackers, Saturn rockets and other exploding goodies you can’t buy in Madison. 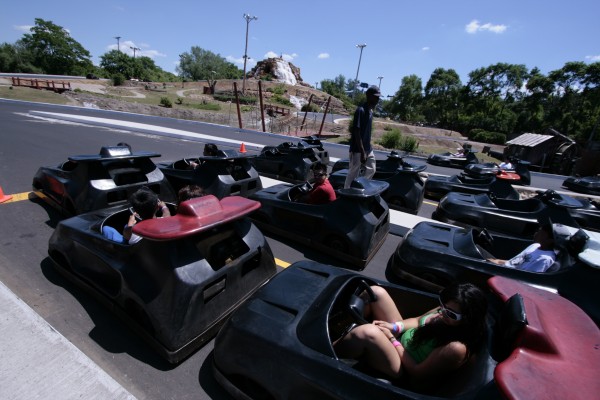 I had to school some punk-ass kids in the proper ways of putting the pedal to the metal.

We arrived shortly after noon, without any itinerary. Naturally, on such a gorgeous day, the water parks teemed with people, but we failed to bring with us any swim gear. Instead, we started things off with a visit to Big Chief Go Karts, where, for $3, we raced around a state-of-the-art go-kart track.

Despite their small engines, the go-karts really go. I had one of the faster ones, which seemed to irritate a trio of young boys to the point of compelling them to try and slow me down. Twice I cruised by a kid in a red t-shirt. On my third approach, I saw him glancing to his rear. When I attempted to pass him a third time, he began to deliberately obstruct my path. When I swerved left, he swerved left. When I swerved right, he swerved right. How was it that this pipsqueak was besting me, The Feral Scribe, a road warrior who has clocked thousands of highway miles and negotiated traffic in America’s biggest cities? I was chagrined.

This game of vehicular brinkmanship went on as we sped up a large incline, our little engines roaring, and continued as we began our descent. Bu I’d had enough. This little punk was no match for my road superiority. When he again glanced back at my position, I cut left ever so briefly. When he, too, cut left, I put the pedal to the metal and cut hard to the right. Realizing he’d been out maneuvered, the kid cut hard to the right before I could pass him fully. A collision was imminent.

A lesser driver may have fallen back, but I was determined to pass him. As he rammed me against the curb, I let off the accelerator a bit, and broadsided his back end. He sped up and as he tried to straighten out his vehicle I saw an opening. Hitting the gas full throttle, I rammed his front end with enough force to spin him so he faced oncoming traffic. With no reverse, he was out of commission until the attendant turned him around.

His buddies then came after me, each deploying similar tactics. In both instances, they failed to keep me down. But just as this rat race was becoming fun, we completed our final lap and were routed back into the pit. 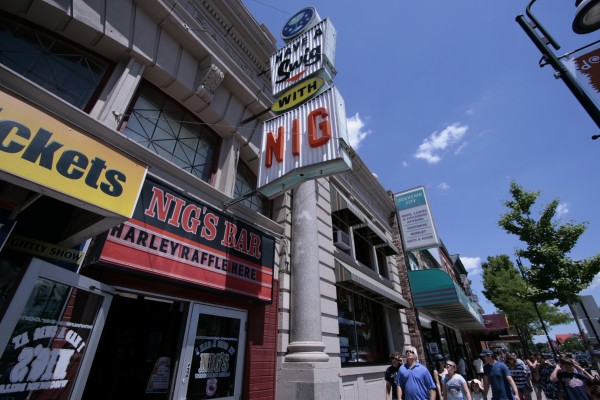 After road warring with children, it was off to have a swig at Nig’s, a very old bar that’s been serving drinks in downtown Wisconsin Dells since 1947. Commentators on several travel adviser sites say they find name, which may have been that of its original owner, inappropriate. “Completely inappropriate,” wrote a visitor from Ohio, “especially in a town that caters to families and children.”

The bar itself isn’t anything special, though maybe night hours are a different story. After sucking down a pair of pretty crappy strawberry margaritas, we perused the gift shops and t-shirts stores that line the strip. We stopped to watch a street magician do tricks for tips after firing off more than a hundred rounds at a paintball shooting range.

We toyed with the idea of riding roller coasters at Mount Olympus, but having just gone to Six Flags a week earlier, the admission seemed a tad high for the parks limited options. So we kept up our stroll, looking for place to grab a beer. One of the drawbacks of the Dells, is the complete lack of outdoor seating. I’m not sure if the city prohibits it, but along the strip there wasn’t any. During our search for a suitable watering hole, we turned onto a cross street and were greeted with a pleasant surprise: the Torture Museum.

Visiting the Torture Museum can itself be torture. This crying boy defied his parents and refused to enter.

What possibly could be more incongruent in a town whose economy is driven by families and fun than a museum dedicated to torture throughout the ages? But that is exactly what you’ll find if you go off the strip and onto Eddy Street. More stunning, at least for me, was that I had never heard of the five-year-old museum, which has been featured on the History Channel. With admission only $7, there was no doubt about what our next activity would be.

The first thing you see upon entering is a fake electric chair. For $1, you can electrocute yourself amid lots of loud buzzing, flashing lights and a dial that measures the rising voltage. It’s not real electricity, of course, but vibrations similar to the Magic Fingers in old motel rooms. The chair’s noise and lights scared a little boy who, upon our arrival, was being coaxed back inside by his parents. When their efforts failed, they left and we went inside.

Exhibits consisted primarily of torture devices and execution techniques pioneered by the Chinese, the Romans and others across midieval Europe, each device accompanied by a brief description of how and why it was used. The Shrew’s Fiddle, for example, was a wooden “fiddle” that was locked around the necks and wrists of German women accused of nagging or gossiping. Other items included a guillotine, an electric chair, a heretic’s fork and crucifixion spikes. One particularly gruesome device, the Iron Maiden, is described in this eye witness account from the device’s 1515 debut:

A forger of coins was placed inside and the door shut slowly so that the very sharp points penetrated his arms and legs in several places, and his belly and chest and his bladder and the roots of his member and his eyes and his shoulders and his buttocks, but not enough to kill him, and so he remained tortured, making great crys for two days, after which he died.

The self-guided tour concluded with an exhibit showcasing John Wayne Gacy, complete with an original painting by the modern torturist and serial killer who was executed in Illinois in 1994. In all, it took about 15 minutes.

It being the Dells, I should not have expected too much, but I left the museum feeling a tad disappointed. Not because it was brief or because all of the exhibits, save for the Gacy painting, were replicas, but because it dealt so flippantly with an issue we’re still debating today. No mention of waterboarding, modern execution methods or even how ideas regarding criminal punishment have evolved. It’s shock without substance. Even the Gacy exhibit, though unique, had an unsettling shrine-like quality that verged on the celebratory.

Jenny Lewis once sang, “Any asshole can open up a museum/Put all the things he loves on display.” She could have been singing about the museum’s founder.

I think the crying little boy was on to something.

Many stores in the Dells have co-opted the more stereotyped aspects of Native American culture.

We didn’t stick around too long following the Torture Museum. After stopping off for another drink, we hopped back inside Purple Thunder and headed back to Madison to wait for night to fall so we could explode our fireworks. Pop! Pop! Pop! Then they were done, too. And so was I. I drank a beer, ate some pizza, and called it a day.