Settling Into My Adobe Abode | The Feral Scribe

Settling Into My Adobe Abode | The Feral Scribe 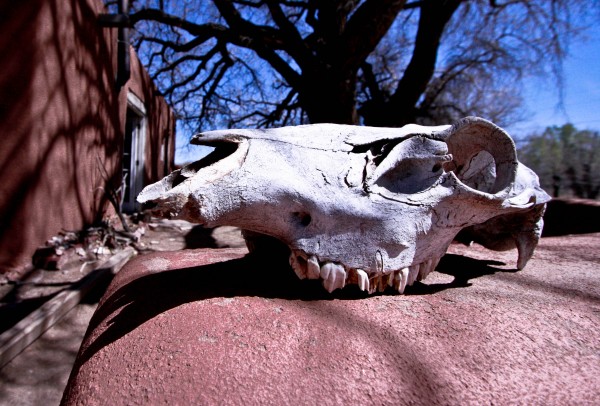 Española, NM – After driving 23 hours over three days I at last arrived at my new home in Española, New Mexico, located in the north central part of the state. It’s a beautiful part of the country. And contrary to the many warnings from friends and others that I would hate living here, I’ve experienced nothing but awe since arriving.

That sense of wonder came as a great relief, because the last time I moved to a new city – Philadelphia in June 2008 – I was miserable from the minute I arrived. Of course, a lot had to do with the dark-hearted girl I was dating at the time, but the city itself was for the most part a trying and difficult place. It never grew on me and my departure couldn’t come soon enough. Of course, it also helps that in Española I have a job in which my skills as a journalist will be put to good use, as opposed to the mindless work I did in Philly, surrounded by corporate lackeys and brainless buttheads.

My new digs are a slice of paradise. It’s a little 550-square-foot adobe hut that sits on 2.5 walled off acres and in the shade of a 103-year-old oak tree. There is a pear and a plum tree, in addition to several fish and turtle ponds, a swimming pool, hot tub and greenhouse.

Of course, being in the middle of nowhere, getting Internet has turned out to be the biggest pain in the ass. There is but one company that services this area. WindStream it is called and I phoned them last Tuesday to schedule an installation for Wednesday. Wednesday came and went so on Thursday I called and spent exactly two hours and seven minutes on the phone as some lady in Virginia asked me the same questions over and over, apologizing profusely because WindStream had apparently lost my original order.

She said I’ll have service by Monday at the latest, but we’ll see about that. I won’t bore you with the many frustrating details of my interactions with WindStream thus far, but I have a feeling I’ll have to visit the local office and raise hell.

Really, that’s a small thing. I Internet more out of habit than any real need to be online, but still… there’s shit I like to do.

So my pad is all set-up. Today I bought a bed from a very nice Hispanic man who is one of many residents here who have turned their yards into perpetual flea markets and furniture and appliance stores. One lady had like 20 vacuums for sale in her yard. Where the hell do you acquire 20 vacuums? That’s ridiculous.

The Hispanic man was very kind and shaved several dollars off his asking price. He then apologized for speaking poor English, which made me feel kind of like an asshole because I didn’t know how to apologize for not speaking Spanish. Although to my credit, I did bring my college Spanish flashcards with me. Hopefully I’ll be able to somewhat converse and show that I’m making an effort at least.

His son then offered to drive the bed to my place, which I was extremely grateful for as it made things a lot easier on me. He helped me assemble it and we shot the breeze for a minute. Next week is Holy Week, he explained, and apparently Good Friday is off the chain down here. Everyone it seems wears a cross and you can even buy Holy Chilis. Roadside vendors also sell Jesus Christ and Virgin Mary t-shirts.

It’s weirdly Catholic here. On Good Friday, some 35,000 people will visit a tiny little church for mass. Some will have walked hundreds of miles across the desert because it is a very special church. I’ll have more about that later this week… The man’s son warned me about which streets to avoid due to Good Friday traffic, but recommended I check out the spectacle since the Vatos will be cruisin’ to praise Christ in their lowriders. In case you didn’t know, not only is Española Catholic, but it is also the lowrider capitol of the nation.

The major problem with living in the middle of nowhere is loneliness. When I was younger and would hitchhike throughout this region sometimes days would pass where I didn’t speak with a single person. Eventually I’d feel so removed from the world I knew that I began to question whether I even existed. After all, who was around to realize me?

Fortunately, I’m pretty good at keeping myself entertained, but I’m certainly looking forward to the end of May when my girlfriend and partner in crime  joins me after wrapping up her spring semester of college. Alone time can be liberating, but adventures are better experienced with friends, and she’s a keeper. From the looks of things there’s plenty around here to explore and write about, all of which I’ll share here with you at The Feral Scribe.

This past year was a bust in terms of my content production here. My apologies to those of you who still check in periodically only to find nothing new. I’m grateful for your dedication, especially that of Dr. Vicki Hayes of Frankfort, Kentucky, who never fails to re-tweet my posts or talk up my site.

Thanks should also go out to my uncle Mark and aunt Linda for their ongoing support and encouragement. I should also thank Mary and Paul again for Purple Thunder, my trusty beloved van, which has proven very reliable time and again, though it sticks out like a sore thumb here in Española. This morning a guy asked me where in Wisconsin I was from, then mentioned he’d seen my van two days earlier at Wal-Green’s, but that I’d dipped before he caught up to me. Turns out he’s from Stoughton, a hoppin’ little suburb of Madison.

Lastly, I owe a deep debt of gratitude to my dad for letting me hunker down at his crib while I searched for work. Funny how a two-week visit can turn into a year long date on the couch. Thanks pops!