Sex Offenders, Jailbait and Consolidating the Nates | The Feral Scribe

Sex Offenders, Jailbait and Consolidating the Nates | The Feral Scribe

I like that there are Carnie Children. Traveling with us is Peaches, a bright 15-year-old who runs the balloon game with her grandmother, Claire. On weekends, Jasmine, 8, comes with her mother, Danielle. Sometimes, there’s a little boy named Nathan, whose father occasionally works another game. Jeff, who is in school to become a cop, brings his 17-year-old son, Jeff, with him on weekends he works. When asked whether it’s a good idea to bring children around the Carnies, Jeff replies, “It’s like an intervention before it gets to that point.”

Jeff also says that if he becomes a cop, the bunk houses will be his first bust. “I’ll go from foot patrol to sargeant in a week,” he jokes.

Though the children are well watched over, protected, there not perfectly safe, as evidenced this weekend when a sex offender infiltrated our ranks.

Brian, a pranksta gangsta from Burlington, invited his wife and a family friend to the bunk houses on Friday. They got drunk and Brian and his wife fought. A lot. Brian was upset that his wife and the friend were going to sleep in the tent together. Brian didn’t trust his wife, especially after she screwed Carnie Scott after Brian passed out in Monona, days before Scott was fired for re-selling tickets.

That night, before the fighting, Brian was trying to get his wife and the friend a job with the carnival. The next morning when Ann came with applications, the friend shied away and wouldn’t look at her. Hotwheels, our indolent 16-year-old farmboy, recognized the friend as a guy his mother had once hired for work, who later molested a young girl.

Checking the sex offender registry confirmed this. Immediately, Corina told Brian that his friend had to go, along with his wife. Brian said he understood and left with them. When Black Nate went home on break, he found Brian had moved out his stuff, leaving behind a television and bicycle.

Even more disturbing is that Brian has two young children, a daughter and a son.

Curiously, there wasn’t a whole lot of surprise at or discussion about this, except that the Carnies seemed relieved they didn’t know the friend was a child molester while he was here. Things would’ve gotten ugly.

While there is a strong aversion to child molesters, a murkier area is the teenage girl, an issue that weighs heavier on some of the younger guys who, barely out of their teens themselves, time again turn away the advances of the wild-eyed country girls looking to hang with the bad boys. In Darlington, a fresh 18-year-old named April began hanging around the camp. I’m not sure who exactly she was after, but everyone was respectful toward her and she herself wasn’t untoward.

There’s always doubt when the girl says she’s 18 but lacks the ID to prove it.

As the Carnies like to say, “Fifteen will get you 20.”

Some of the older guys joke with the old lines, “Old enough to bleed, old enough to breed,” or “If the field has grass, play ball.”

I’ve heard of Carnies past getting arrested for sucking face with girls too young. Tony, who is reminded daily of the approaching one-year anniversary of his dalliance in Middleton last year with an obese 58-year-old who lured him to her bed without much trouble, often complains about being unable to tell how old a girl is. “You know, I’m looking at this chick, nice tits, ass, long legs, tan like me, and I’m like, ‘Whoa! You’re only 16,’” he says. “There should be a law that says underage girls can’t wear those high shorts and low tops. Girls didn’t dress like that when I was young.”

Then he adds, “If I’m drunk and a girl like that wanted to do me, how can I be held responsible? I wouldn’t do it, I’m just saying, it’s hard to tell.”

Harley is an interesting character. Though he owns the company, he has no control over it. He’s a man at odds with the world around him. He was in a particularly bad mood the other day so I asked, “Bad day, Harley?”

“I’ve been having a bad day for 50 fucking years,” he grumbled.

He’d just been pulled over, in Beaver Dam, accused of backing into a vehicle. He became aggressive with the officer, who cited Harley for disorderly conduct. Whether he backed into the vehicle is the subject of speculation, but none of us would be surprised if he did. Last year, he forgot to put the emergency brake on in the Tilt-a-Whirl truck and it rolled into a vehicle. He did the same thing with a stock truck this year during set up. At any time the truck could’ve rolled over the guys lifting parts from the back. Today, he got stuck when his front wheel got stuck in a fire pit.

At the carnival, he is kind of an attraction in-and-of himself. Several people have asked me if this is the carnival with the “white-haired guy.”

On Saturday, in Darlington, Harley asked Carl, our Tilt-a-Whirl operator, to get him a glass of water. Harley watched the ride while Carl was away. When two young boys standing at the Tilt finally asked Harley where the operator was, Harley replies, “He was taking a shit and the hogs got’em!”

When he caught to teens smoking pot behind the fun house, Harley goes, “Where’s the crack house in Darlington? I need my fix.”

Harley doesn’t talk shit to me like he does the others. When one of the Carnies passed out drunk beneath the bunkhouse, Harley chortled: Hope you got a picture of that one for your article.

The other morning he came to borrow oatmeal from me. He poured some into a bowl, then returned with water and had me microwave it for him. As he sat outside my bunk eating his breakfast, Hotwheels sat next to him, eating a Nutty Bar.

“You’re gonna be an obese little fucker you keep eating that shit,” Harley told him.

We all laughed. So did Hotwheels.

“You think I’m fucking with you, well…”

Harley ate bad his whole life and now has diabetes, which he has undoubtedly added to his list of things to be unhappy about. 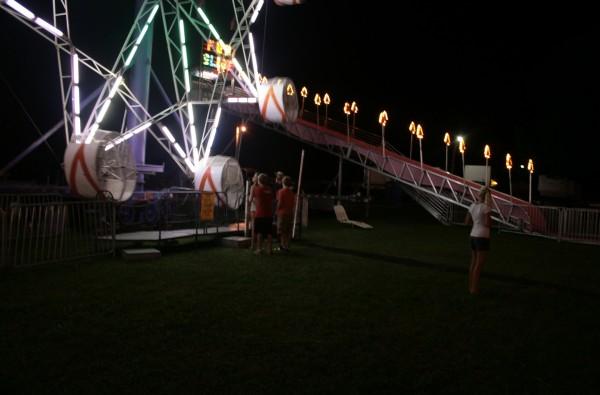 The bunk houses are almost full. To make room for a new male and female that arrived together, I, White Nate, moved in with Black Nate. It was a strategic move on his part, because he’s guaranteed his own bunk again in two weeks when I jump of this parade. Works for me because in return he’s given me the bottom bunk and use of his refridgerator. Already, the Carnies are clamoring for the items I’ve acquired.

I smell trouble with the new people, Flo (male) and Sam (female). Flo is a dorky little gangsta dude from Darlington and Sam is his love interest. He told us last night while taking apart the Merry-Go-Round that he wishes she was his girlfriend, claiming that getting her a job with the carnival was making headway in that effort. In short, she owes him her heart.

Today, Sam made a little stink about Corina bunking them together, “because I don’t want people thinking we’re together.”

Already, Sam is making eyes at Craig, a 22-year-old dad from Hartford, WI, who was in jail not too long ago. His cellmate, Tim, also started this weekend, at the Fun House, near the Fun Slide. Tim spent a lot of time standing under my umbrella, which annoyed me. He could’ve just stood inside the Fun House. 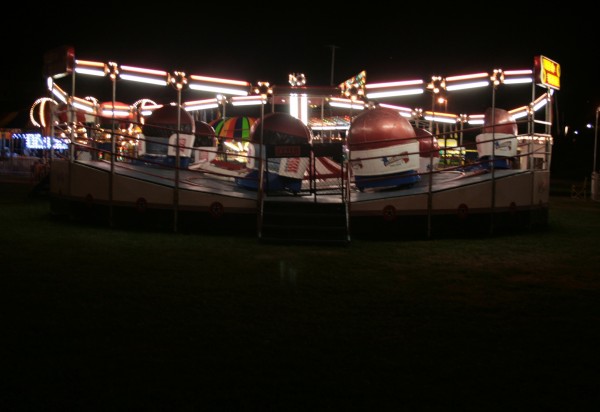