Yesterday we decamped Black River Falls, tearing down our bunkhouses in the rain. Having come off a five-day spot, and without a full day off since July 3, everyone’s in a fairly foul mood. Making matters worse is Sam, our suspected pill-popper who now openly crushes and snorts her opiates. The girl has a black cloud over her, which she brought with her today when she rode with us for the three-hour haul to Spooner. After Sam decided to hop in our truck to hang with Black Nate, Jeremy jumped ship to ride with Tim, unable to tolerate Sam.

We turned out of the fair grounds, onto Black River Falls’ main drag, which, after a sharp bend in the road, segues into a steeply sloped stretch of road that also bends. Picking up speed, I tapped the breaks, but there were none. With a ride in tow, we were spit across the right hand lane, into the curb, and spit back into the left lane and fishtailed down the hill. Carl noted later that had we not hit the curb the way we did we would’ve flipped. Had we been on a road without a curb, we would’ve rolled.

We stopped for gas at the edge of town. Something was clearly wrong with the brakes. After topping off the brake fluid, we hit the highway toward Spooner, but still no brakes. Just outside of Spooner I rolled to a stop inside the HWY 70 junction intersection. Across the road was a state deputy who then followed me for some 10 miles before pulling me over.

He was pleasant, saying he pulled us over because the truck I was driving didn’t have the company name on the side, as is required for vehicles hauling loads over 10,000 lbs. (the ride I was hauling was 9,000 lbs.). He did a full inspection, checking lights, blinkers, brake lights, fire extinguishers and more. For an hour or more we sat there as he ran our names and filled out paper work, which was a list of warnings. Even I received a personal warning for not keeping a log of my driving time, which I had no clue was required. So he basically put me on a time out from the road, explaining that the law prohibits me from hauling loads for 10 hours, enough time I guess to begin a log of hours.

Of course the Wenzels weren’t happy, and instantly presumed it was something I’d done that attracted the attention, when, of course it is I who should be pissed at them for not explaining what to do if pulled over while hauling a goddamn kiddie ride. Today, rumors circulated that I don’t have a valid license and am on probation. This morning, Ann drills me on the license thing, then Harley approaches. “What the fuck are you on probation for?” he asked.

“Haven’t been on probation since I was 16, Harley.”

“That’s not what they’re saying.”

“The people who don’t know what the fuck they’re talking about.” 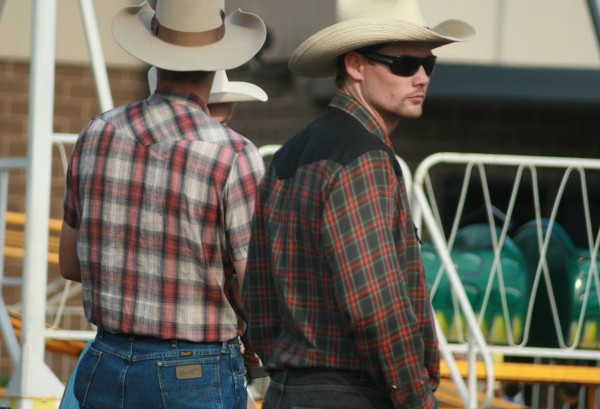 Never have I seen such a concentration of gimps, limps and cripples as I did in Black River Falls, leaving us scratching their heads. Each night we asked the same questions: Did you see the guy with no legs or the girl with no arms or the old man with wobbly legs or the lady with a fupa so large it nearly scrapped the ground as she walked. It reminded me of Sherwood Anderson’s Winesburg, Ohio. All along the midway people limped or hobbled along, their faces listless. Even a photographer from the local paper, who asked to snap a few shots from the top of the slide, had twisted little fingers on stubby little arms. Adding to this sort of bizarro aspect were the preponderance of cowboys and Indians. There aren’t many natives out east, so successful was the government’s policies of forced relocations west of the Mississippi, as well as genocide. But in Black River Falls, little boys in cowboy hats and native children with long, shiny black hair shot each other outside my slide with water guns to cool down in the heat.

But Black River Falls, aside from having no phone signal or Internet access, was a riot. Sam and Black Nate’s fuckfest last week birthed an epiphany in the heads of a few of the carnies that yes, carnies too can get laid, sending them on a mad quest for some hanky-panky. Flo managed to meet several goofy looking obese chicks while working the slide. Each night he went home with them, but was never able to close the deal.

Tony chased after a mustachioed woman with missing teeth, until her mother, in front of him, began disparaging carnies. “Hey lady,” Tony told her. “I’m a carnival ride operator. For chrissakes, this is 2010, not 1976.”

When that failed, he chased a woman we called “Biggins,” because she was large, but not anywhere near as large as the woman Tim 8.1 chased. She had the height of giant and the girth of bull. Massive. Tim 8.1, who is on probation for leading police on a drunken low-speed chase on a riding lawn mower, danced the night away with her. Both Tony and Tim 8.1 failed in their efforts.

Stranger still, I learned that Sarah, a sweet-faced 21-year-old game jockey we scooped up in Waunakee, has me fixed in her carnal crosshairs. Tony last week asked if we were talking. I laughed, because Sarah and I had never talked at all. Then he informed that all she does is talk about me. Then Sam, her bunkmate, relayed a similar message, asking me what I thought about Sarah. I smiled and asked Sam if we were still in high school and that maybe we could all begin passing notes. It went on as such all week, the talk, the weirdness, the attention. Then Friday, Sarah laid her bait, asking me, via text message, on what I think was date.

It read: Let’s get stoned and go for a walk tonight.

The week has gotten off to a rocky start. On Sunday, Hale, a Black River Falls native, was arrested at his ride for an outstanding warrant for fishing without a license. An hour later he came walking back up the midway toward the Scrambler after Ann paid his fine.

Liz, one of the Wenzlow girls, has taken to calling Sam a whore at every opportunity. Yesterday, I came back to the bunkhouse and my door was shut, the entire trailer shaking. A bunch of people were sitting out front watching it shake. Shit was being knocked off walls. The jack stands looked like they were going to buckle. Suddenly, Liz appears. “Who’s fucking in there?” she screams.

“Nate and Sam,” someone answered.

“You fucking whore!” Liz screamed into the door. “Why don’t you have some self-respect?”

Today, Corina told Sam that sex is no longer allowed in the bunk houses.

It has also been a week of injuries for the best hands. Today, Carl, who runs and assembles the Tilt, busted his ankle. Then the Hampton’s canopy collapsed on Mark’s head. Craig still has cracked ribs. And, to make matters even worse, Jeremy quit. Sadder still because Jeremy was one of my favorite people here, but Liz, who definitely wears on people, became too much for him to bear. He told me in Darlington that he was sick of her. Then today, when he missed work call, she stormed into his room and berated him.

An hour later he was packed up and gone.

For all of you fair-skinned people, the picture above is what third-degree sunburn looks like. This is Aaron, who is white to the point of translusence, except for his neck, which sustained this serious sunburn. Of course, Aaron made it worse by refusing offers of sunblock, refusing to wear a shirt during set up, and refusing to see a doctor. I was amazed he was even able to work. The burn has just gotten worse and worse. He’s not with us this week in Spooner, which everyone was happy about until Jeremy quit and Carl snapped his ankle. Aaron has an opinion on everything, but he’s a good worker. We could’ve used him this week.