The Benefits of Using a Uniquely Human Trait: Foresight | The Feral Scribe

The Benefits of Using a Uniquely Human Trait: Foresight | The Feral Scribe 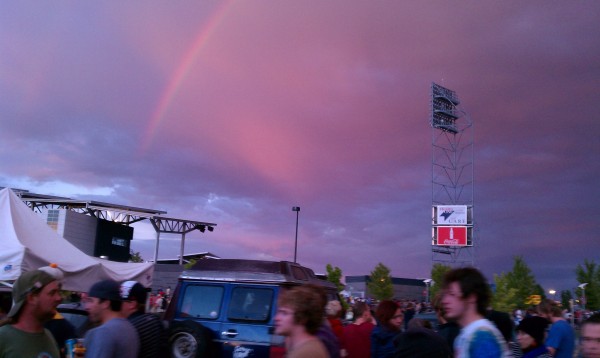 Commerce City, CO – When hashing out the logistics of big projects I can always count on one thing: forgetting something important. Halfway to Denver I realized I’d forgotten several important things. First was a jar full of silver change that I save to pay meters, tolls and other small expenses. Next it occurred to me that I’d forgotten the folding table, which necessitated us having to purchase one in Colorado. I also left behind our drink cups and shot glasses as well as our extra cooler. In all, my forgetfulness set us back $100.

These were small things in the grander scheme, but these missteps compel the worry that the stage is set for disasters to come. The only way to mitigate potential pitfalls and make known the unknowns is to diligently gather intel beforehand, something only the most enterprising of the Shakedown vendors do.

The day before Phish’s first show we drove out to Dick’s Sporting Goods Park in Commerce City, about seven minutes from Denver, to peep the lay of the land. Driving the grounds we observed there were multiple parking lots with just as many entrances and no way of knowing which one would be used. This made it impossible to determine where the vendors would gather prior to the lot opening at 3 p.m. sharp. In Chicago we staged on a street opposite the lot entrance, but being so close was no guarantee against becoming trapped in the gridlock and losing a spot on Shakedown. With nearly $500 tied up in beer and booze in addition to the expenses of travel, landing that spot was imperative.

But no amount of planning can minimize the biggest risk of all: the possibility that event staff or police will put the kabash on your operation. Unfettered vending is typically permitted because the band, as a courtesy to its fans, leases the lot on their behalf. This arrangement helps the venue recoup revenues siphoned from their concessions, while giving fans the freedom to do mostly as they please. Still, rules vary and are often enforced unevenly. Some venues crackdown on bootleg t-shirt merchants. Others hassle those selling alcohol. Sometimes the local health department will inspect the food vendors and require them to purchase a health permit. The Verizon Wireless Center charges a $150 vending fee. At Red Rocks, because it’s technically a city park, no vending at all is permitted.

Because Phish had never played this venue no one knew what the situation would be. Naturally, with so much cash tied up in this affair, the uncertainty spurred considerable anxiety.  In the hour leading up to the lot opening the vendors gathered on a street leading straight into the venue. During this time we double-checked that we had everything we needed, namely enough ice for drinks. My sidekick wrote up The Shakedown Tavern’s menu, while I tallied our inventory, counted out our change and calculated what we need to bring in to cover expenses. As three o’clock drew near, the vendors fired up their engines and at precisely 2:59 p.m., the caravan, with much fanfare, snaked toward the lot.

That first night was nearly a disaster. The parking staff directed us to a gravel lot instead of the grass lot the band had leased. In the absence of clearly designated stalls and staff to ensure vehicles were parked in an organized, symmetrical fashion, people abdicated their common sense and parked wherever and however they saw fit, claiming as much space as they could. By the time event staff realized they’d made a mistake Shakedown was already open for business. With lots of hootin’ and hollerin’ they tried unfucking the clusterfuck, but with people pouring onto the lot it just wasn’t going to happen. An egregious few were made to straighten their vehicles, but staff quickly gave up trying to tighten up the space. Instead the greedy bastards saw in the mess an opportunity to milk more money by charging each vendor an additional $15 for the space wasted on account of their mistake.

As event staff made the rounds extorting vendors the sky grew ominous and gray. The temperature dropped rapidly and the wind whooshed in formidable gusts that sent EZ-Ups and merchandise a-flyin’. Above us was the very edge of a large slow-moving storm that, from the ground, appeared to abut clear blue skies. Shakedown, up and running not even an hour, was a ghost town as people took refuge in their vehicles or camp sites on the other side of the venue, even though no rain was forecast for the area. Vendors nonetheless secured their EZ-Ups against the wind and began draping tarps over their merchandise in case of rain. I didn’t bring our EZ-Up so we loaded our stock in the van.

When the sky finally opened up it dumped on us a heavy rain that blew sideways for a solid 30-minutes. Then just as abruptly as it began, the rain stopped and the sky cleared. In the blink of an eye Shakedown went from ghost town to a bustling hub of commercial activity. A line that never seemed to shorten had formed at our tavern before completing our post-storm set up. A few other vendors peddled beers and mixed drinks, but our variety and prices were not only unrivaled, but unbeatable.

To supplement our standard beer selection I brought along a few select cases of beer from Wisconsin’s New Glarus Brewery, which produces some of the best beers known to man. Because New Glarus Brewery only distributes inside Wisconsin, I was quite shocked by how many people were familiar with the brewery and its flagship beer, Spotted Cow. Along with a case of Cow, I also had on hand several cases of the brewery’s latest concoction, an utterly fantastic black IPA that garnered high praise from those lucky enough to score a bottle.

If business was brisk from the start it picked up in earnest once event staff began enforcing a strict no-glass rule. Beer vendors were told that unless they had plastic cups to pour bottled beer into, which none but us did, they had to shut down. Had the others done a little pre-show research they’d have seen this policy spelled out in big bold Arial type on the venue’s website. Anticipating this crackdown, I limited my bottles to the New Glarus beers. Everything else I had was in cans.

For three hours we moved beers and mixed drinks at a furious clip, our tip jar so stuffed with bills that people simply walked away without their change. In Chicago, no matter how much beer we stocked we never seemed to have enough. I made a point this time to double-down on inventory but before the show even started we were down to less than a dozen beers. And the no-glass policy caused us to burn through more cups than usual, leaving us without anything to serve drinks in. With nowhere nearby to re-up, The Shakedown Tavern packed up for the night to the disappointment of many, including us.