The Festering Tensions of Carnival Life | The Feral Scribe

The Festering Tensions of Carnival Life | The Feral Scribe

Last weekend in Waunakee, Flo, the Romanian orphan, was placed with me on the Fun Slide. He worked the top of the slide, helping the kids onto the gunnysacks and ensuring the long line kept moving. I worked the bottom, taking tickets and dealing with parents.

I’ve written previously of how Flo talks incessantly, often about nothing, so before the carnival opened I stressed to him that under no circumstances was he allowed to leave the top of the slide. Throughout the day, whenever he needed something, he’d begin miming messages to me, making ridiculous gestures until I finally motioned him down to convey the message verbally. Usually he just wanted water or cigarettes.

I like Flo and feel bad everyone is cruel to him. Even I sometimes lose patience with him. After the crowds died down, I felt bad watching him pace back and forth from boredom at the top of the slide, so I allowed him to hang out with me on the ground where I learned more of his life story. I’ve already written about how he grew up in a Romanian orphanage after his parents died and was adopted by missionaries from Mineral Point, WI. Flo helped tear down the carnival last year in Darlington. Since then he’s gotten his life in order enough to travel this year with the carnival, which he calls his life dream.

At 25, he is already divorced. He explained to me how his wife used to beat him and one night while eating dinner they got into an argument and she cut his throat with a knife. They had two children. Once, he was playfully pinching his daughter’s cheeks, he informs, but pinched a little too hard and left a bruise. When his wife asked what the mark was he panicked and said he thought it was grease. When it became evident that it was a bruise, she had him arrested for child abuse.

When he needed a car following the divorce, his father agreed to purchase one for him on one condition: that he get a vasectomy. He did and got the car, only to have a teenager crash into it on his way home, causing $6,000 in damage to a $2,500 vehicle.

That is the kind of luck Flo has.

He arrived at the carnival with Sam, a 21-year-old opiate addict who everyone suspects is still popping pills. Flo has a crush on Sam, but Sam has already hooked up with at least two of the carnies, which has led to several arguments between them. Harley can’t stand Sam. He doesn’t like loose girls. In Waunakee, he was up early when he saw Sam come out of Jeremy’s room. Later he tells us, “That girl has a hot twat and she’ll visit each of your rooms to cool it off, just watch.”

The next morning, Harley was complaining about her again. “Did she come out of your room this morning, Harley?” I asked him. “You’re not doing a very good job at being a comedian,” he shot back. “You won’t ever find her stinkin’ thing in my room.”

Now she’s letting my bunkmate, Black Nate, cock on her. The other night, the entire trailer was rattling and shaking, because someone forgot to put in the jack stands, which prevent bounce. People were banging on the walls, telling them to stop or hurry up. They did stop, but resumed moments later. Sam’s new bunkmate, Sarah, apparently slept through the entire ordeal.

The bunkhouses are now full, but every new help that’s joined us since Monona has been utterly worthless, forcing the rest of us to work twice as hard during set up and tear down. They’ll walk from ride to ride, searching for easy tasks, but when asked to help with something major they balk or go elsewhere.

Hotwheels, the indolent 16-year-old with a major chip on his shoulder, has mastered this. Anything that requires the least amount of effort he walks away. Ask him to help with something and he gives you attitude. Some of the newer guys during this week’s set up got into his face, hoping the threat of physical violence will at least compel him to keep his mouth shut. Unfortunately, he knows none of us will hit him due to his age, and the fact that our boss, Corina, is acquainted with his mother and is therefore her responsibility.

But when you’re lifting hundreds of pounds of steel in the scorching sun and see him standing there smirking, refusing to lift a finger, telling us we’re doing things wrong, talking shit, socking him in the nose becomes more than a little tempting. At this point, it’s almost obligatory.

I’m writing an article about the carnival for Isthmus newspaper in Madison, WI. I think Corina and her sisters were skeptical about my credentials when I asked them for interviews for an article I wanted to write about them. It took a lot of coaxing and reassurances and pleading on my part. After all, I was hired as a Carnie and what Carnies say is always suspect. But last weekend the paper sent a photographer out to take the girls’ pictures and mine, too! Some of the other Carnies were upset that the photographer wasn’t interested in them, so I had to explain how newspapers function, that I have no say over how my stories are packaged.

For the last few nights I’ve begun working on the article, which is a little weird since it’s about them that I’m writing. One by one they creep around to sneak-a-peek at what I’m writing, so I have to explain that it’s not ready to be read yet. And, of course, everyone wants to be interviewed so his or her names too can be in the paper. Some have grumbled about asking too few questions, too many questions, not the right questions, etc.

There is also a whiff of jealously. Redneck Scott’s brother, Aaron, started with us last week. Aaron is a talker of tall tales and behind his back people call him “Never Ending Story.” Harley calls him, “The Guy Who Has Done Everything.” He has hot-wired every kind of car, has licenses and certifications for just about everything, is an excellent cosmetologist but will never work as one because he fears people will think he’s gay. Naturally, he has a better camera than I do, but he doesn’t know what kind of camera it is, only that it cost more. With Aaron, everything centers around fighting, his likes and dislikes, what he’s done and capable of doing. He has an opinion about everything. I can’t vouch for his integrity one way or another, but the consensus is that he’s full of shit.

Last week, Tony and I were discussing sports when I mentioned that I’ve never cared much for them. “Even if you had free tickets you wouldn’t go to a game,” Tony asked. “Probably not,” I replied.

Aaron, seeing an opportunity to insert himself in the conversation, says, “I would never write. I hate writing. I think it’s a huge waste of time.”

This weekend, the Fun House, which he operated, was next to my Fun Slide. During the slow times I read a book. After we closed on Sunday, Aaron, an alleged cage-fighter-in-training asks me, “Man, your arm must be tired from lifting that book all day. I know mine would be. That’s why I never read.”

I figured this is a true statement, why with all his time spent accumulating amazing credentials, hot-wiring cars, cage fighting, styling hair and taking pictures with his expensive camera, he probably doesn’t have much time to read anyhow.

Then yesterday for some reason he gave me a copy of Eminem’s new CD, which I appreciated greatly. 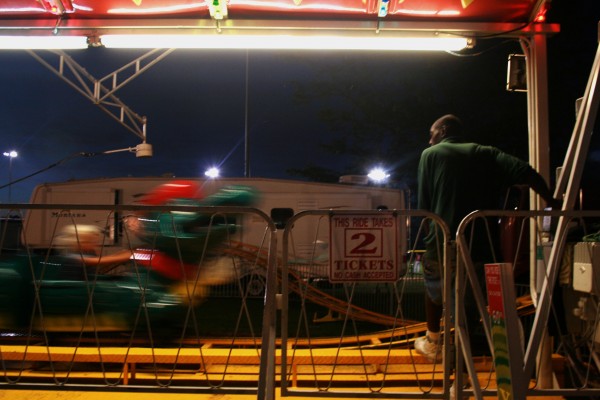 WaunaFest was busy. It’s one of the busiest spots the Wenzlow carnival works because unlike the rural county fairs, Waunakee is a fairly affluent community. Everyone was dressed very nicely and the kids wandered the grounds with $60 worth of ride tickets. But with affluence comes a lot of griping about costs. At the Fun Slide, one father bemoaned the $3 cost after watching his daughter slide down. “That’s not much of ride,” he complained.

“It’s not a ride at all,” I replied. “It’s a Fun Slide. You walk up and then slide down. That’s it. The kids love it, but the parents for some reason always feel cheated.”

At the G-Force, Tim 8.1, who earned the name because he drinks cheap, high-octane beer, was covering for Redneck Scott, who had the week off for a concert up north. He had a bunch of pukers on the ride, but for some reason failed to clean it all up. During set up this week, he caught hell when Liz, who owns the ride, saw dried vomit everywhere. And so in the blazing heat of Black River Falls, Tim 8.1 scrubbed puke off the hot metal steps and steel caging.

We all laughed at his oversight or laziness, which ever you believe, but only because it was on Liz’s ride. Next to Harley, Liz, 30, has the fiercest temper of the Wenzlows. She is also considered to have the sexiest body of the three girls, even though most of the guys covet Corina, who possesses the rare combination of brains, brawn and beauty. Liz knows she is sexy and flaunts it at every turn. If you stare too long, she’ll tell you to stop undressing her with your eyes. She has a sixth sense for the guys staring at her rear. She’ll call you dingbat or moron or lazy piece of shit, but for some of the guys the only affect this has is a waking of their inner-masochist. Liz hates carnies, at least most of them, saying they’re the worst part of her job.

Yesterday she stormed into our bunk area and screamed, “It smells like dick over here! Fucking dirty carnies. Take a shower!”

Tim’s failure to clean the puke of her ride underscores her point about dealing with the help, and reiterates my point about the lackluster initiative the newbies exhibit. Smelling like dick, as Liz puts it, is gross, and so is failing to clean puke off the ride. Mark put it like this, “I don’t give a shit if I have a line of kids to Tokyo, if there’s puke on my ride, I’m cleaning it up.”