Chimayó, NM – After two weeks in Rio Arriba County, New Mexico, I’m still fascinated daily with how different life is here. Were it not for the Post Offices and English-language road signs no one could fault you for wondering whether you hadn’t somehow slipped out of the United States without realizing it.

Here, things like the Declaration of Independence or places like Philadelphia have little significance. The Mayflower and Jamestown mean nothing, either, because residents of this area have a very different origin story, one rooted firmly in Spanish and Native cultures. Española, the city in which I live, preceded Philadelphia, the city from which I moved, by roughly 84 years.

In Rio Arriba, traditions are closely guarded and federal encroachment on residents’ way of life is greatly detested and met with formidable resistance. It is also a deeply religious place and, fittingly, home to one of the Catholic Church’s most sacred shrines, el Santuario de Chimayó.

Beginning on Holy Thursday and lasting through Good Friday afternoon, upwards of 35,000 worshippers made the annual pilgrimage to Santuario, many arriving to touch the dirt they believe has special curative powers or that will bring them good fortune in the coming year. Many walk from as far as Albuquerque, some 90 miles away.

On Thursday night I drove along State Road 76 toward Chimayó and spoke with many pilgrims, who came in all colors, shapes and sizes. From Española it’s roughly a 25-mile round-trip trek along a very tight, hilly and unlit road, but as darkness fell, very few were wearing reflective gear of any kind. Nor did they carry flashlights or other items to make motorists aware of their presence, relying instead on the Lord to ensure their safe passage.

The shrine, a registered National Historic Landmark, was built over a three year period beginning in 1810 by a peasant named Don Bernardo Abeyta who, according to legend, observed an object glimmering in the hillside while praying during Lent. The object was crucifix, which he gave to a local priest. But after the crucifix mysteriously returned the next day to the spot where Abeyta had discovered it, he asked the Archdiocese of Mexico for permission to build a shrine marking where he found the cross. Today, the shrine sees some 500,000 annual visitors from around the world.

Many of the pilgrims take home dirt from the hole Abeyta dug. One woman I spoke with planned to sprinkle a little in the corners of her home. There was a time when pilgrims would eat the dirt, but the church now actively discourages this.

What struck me was that many of the pilgrims walked without any provisions at all, even those who strolled through the frigid darkness of early Good Friday morning. No sleeping bags or flashlights. Many seemed not even to have brought with them any water or food. Sacrifice is a big theme to many, but so to is tradition.

A group of guys I met who’d walked nine hours through the night explained their great-grandfathers had made the journey, as had their grandfathers and fathers. At eight a.m. Good Friday morning they looked cold and exhausted but were in incredibly good spirits as they awaited their ride home.

I’ve mentioned in previous posts the high number of ornate roadside memorials in the area, established to remember those who’ve died in car wrecks. Yesterday I learned that a number of families begin their pilgrimage from these memorials, in honor of their fallen loved ones.

I was on the road very early Good Friday morning and, before the sun had even risen, droves of pilgrims had already set out toward Santuario. Some parents pushed their little ones in strollers. Friends and couples walked side by side. Some carried large, heavy-looking crucifixes, while others walked in large groups reciting Hail Mary’s as they pushed ahead. And yet others walked alone to reflect and give thanks privately.

A number of concession stands were set up along the route to provide pilgrims with free bottled waters and nourishment. The county also has a large Sikh population that had set up a table full of fresh fruit, trail mix, Gatorade and hot coffee. The guy who ran the stand said it was their way of paying respect to another religion.

There was a strong law enforcement presence, with a few DUI checkpoints. I’d heard that pilgrims in the past have died after being struck by passing motorists.

At one point I pulled off to the side of the road to take some pictures, which I felt kind of jerky doing. There isn’t much of a shoulder to speak of, so Purple Thunder totally obstructed the path of those walking on that side of the highway.

A man with a warm smile and several missing teeth asked if I was going to Chimayó, and if so, could he catch a ride. He explained that he’d been

trying to hitch a ride, but suspected passing motorists had confused him for a walker. He went on to explain he’d just came from the hospital and was eager to get home.

“You smell like you just left the bar,” I said.

He laughed a little and said, “I went to the hospital after the bar.”

We jumped into Thunder and roared off toward Chimayó. He told me a story about how once some people were gunned down at Santuario. “I’m not religious,” he said, “but that’s just wrong.”

He had a lot of questions for me and before I knew it we had arrived at his destination: A bar just outside of town.

On my way back to Española, State Road 76 was inundated with walkers, forcing vehicle traffic to a crawl. Most residents here drive gigantic pick-up trucks that nearly occupy a full lane to begin with, so the margin for error in terms of slight swerves is nil.

But there wasn’t a single whiff of impatience. No one honked their horns or made aggressive moves. The walkers squeezed in closer to the hillsides and cliffs as best they could, space permitting.

The Good Friday pilgrimage was also an occasion for those with lowriders to show off the vehicles they’ve put thousands of dollars into, with shiny rims and spinners, ornate paint jobs and hydraulic suspension systems retrofitted to the 1950s and 60s-era vehicles.

Around 6 p.m., as I was leaving work, one of Española’s main roads was bumper-to-bumper traffic with lowriders and people packed into the beds of pick-up trucks, presumably returning home from Santuario. The energy in the air as Good Friday passed into Easter weekend was electric.

Despite the congestion, no one seemed in all that much of a rush. Some riding in the pick-up beds cheered and hollered and kissed the crucifixes around their necks. Everyone seemed so happy and blessed as they made their ways home to spend time with family and friends. I’ve seen a lot in my life, but this was among the most remarkable events I’ve ever witnessed.

And, as far as I know, the Lord saw to it that everyone returned alive. 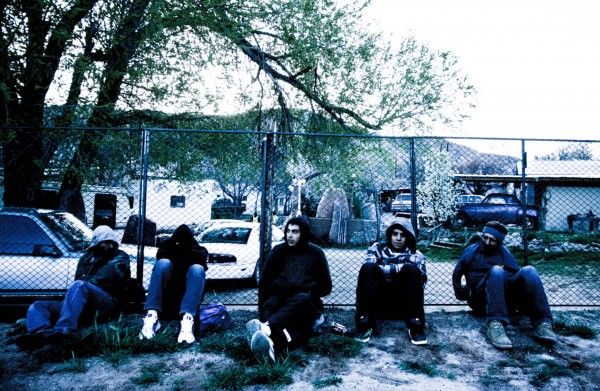