A mural of Edgar Allan Poe painted on a project housing unit in northeast Philadelphia.

At the corner of 7th and Spring Garden Streets in northeastern Philadelphia is a non-descript home flanked by project housing and large tracts of commercial space. Between the years of 1837 and 1844, Edgar Allan Poe lived in Philadelphia, writing many of his most famous works during his time here, including The Gold-Bug, The Murders in the Rue Morgue and The Tell-Tale Heart. In all, he published 31 stories while living here.

Despite the critical successes of his masterworks, Poe remained poor up to his death. Publishers of the Evening Post in 1845 paid Poe $9 for The Raven. Four years later he was found delirious on a Baltimore street, wearing clothes that weren’t his. He died a few hours later. 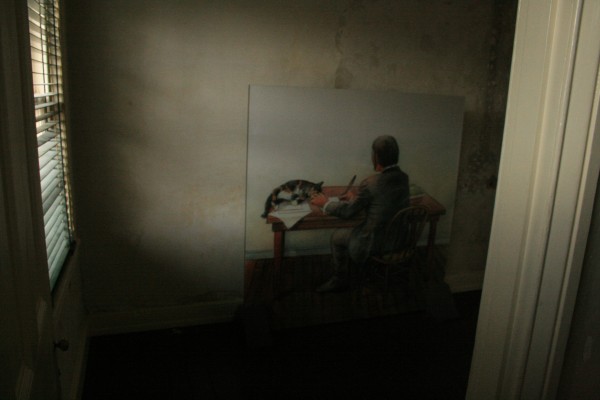 One of two rooms Poe likely wrote in.

Poe likely wrote in this room and slept in the one across the hall. A room on the third floor belonged to his wife, Virginia. Virginia was Poe’s cousin who married him at age 13. They were from Virginia and were against slavery’s abolition. Today, Poe probably wouldn’t much appreciate the rap music coming from the projects across the street.

Virginia would’ve been sick with tuberculosis by the time they moved here. She died in early 1847.

No one knows what he wrote while living here, but speculation has centered on the poems A Tale of the Ragged Mountain, The Balloon Hoax, and Eulalie. 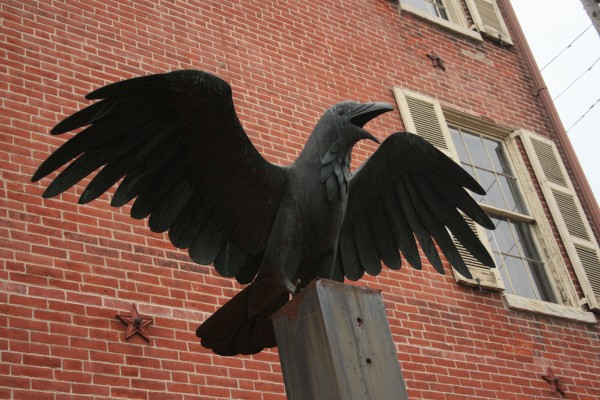 In a nod to his most famous poem, this raven stands watch over the Edgar Allan Poe house, one of at least three homes he rented during his time in Philadelphia. The surrounding neighborhood deters a lot of tourists from visiting and frankly, there’s not a lot to see, except placards full of factoids and an eight-minute video touching on important aspects of Poe’s time in Philly. The 15-minute tour was hardly worth the 40-minute $4 round trip.

At least admission into the empty house was free.