The Land Where Nothing is Everything | The Feral Scribe

The Land Where Nothing is Everything | The Feral Scribe 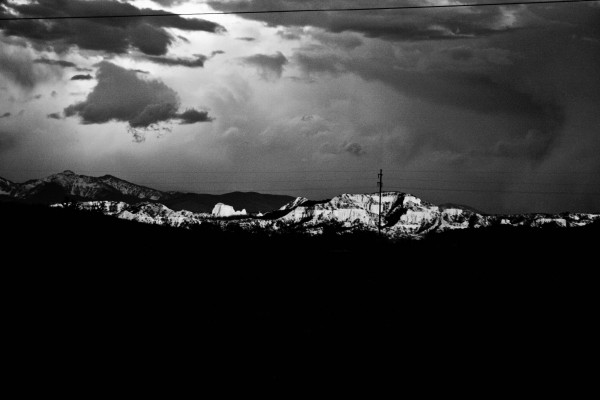 Rio Arriba County, NM – Land of Enchantment is a supremely apt description for New Mexico. As someone last night said of the landscape, It really draws you in.

Indeed, northern New Mexico is otherworldly. Once a week I drive 66 miles from Española to Tierra Amarilla, the county seat. Highway 84 north, paved along an ancient seabed, snakes across pastoral valleys before entering the red rock canyons that you can see jutting above the horizon from miles away. But there comes this point when these sheer rock cliffs begin to rise rapidly toward the sky. In an instant the cliff is towering over you as you drive into the gray of its shadow. For several minutes it appears as though you’re going to drive straight into the rockface when suddenly the highway makes a hairpin roller coaster turn into a canyon that seems to swallow you.

Evenings tend to be every bit as spectacular as the sun dips beneath the horizon and the Española Valley becomes awash in a glowing splash of red light that illuminates the mountains and mesas that ring the city. The glow is almost hallucinatory, and seems to bend the contours of the world before you as if Dali’s paintbrush had swished across the sky. Apparently this is called Alpenglow, and is caused by indirect sunlight reflecting down from water and ice in the lower atmosphere. It is a unique phenomenon, scientifically distinct from a normal sunset.

When the evenings are cloudy, the sky will sometimes open up a bit, allowing the sun, like a stage light, to shine on the vistas below, as in the picture above. The pairing of these geological sights and atmospheric phenomenons are impossible to ignore. Because there is very little cell reception between towns, and the radio tends to jump frequencies, there is little else to do during this drive but throw on the cruise control and take it all in.

One of the most striking things about Rio Arriba County is that the Internet and social media have little value for many residents here. In this election season you’ll find just one of about a dozen candidates who bothered to launch a campaign website. None of them have Facebook pages or Twitter feeds. Campaigning is very much a door-to-door effort, which is taxing since many of the county’s voters live in very remote clusters scattered across an area the size of Connecticut.

Few businesses have websites or maintain Facebook pages, either. I’ve yet to find a fellow blogger or Twitterer, which probably makes me the county’s most popular online media persona, by default of course. Cell phones are ubiquitous because they’re useful, but I’m guessing that Internet service isn’t even an option for those who live in the far reaches of the county. After all, sections of the county’s largest city, Española, aren’t yet broadband-ready. Fortunately, I live in a wired part of the city, which happened out of dumb luck since it’s not something I’d have even thought to ask.

Not that an Internet shortage in rural areas is any sort of profound revelation, but after years of web browsing and incorporating online activities into my day-to-day life it’s a peculiar shift to not have Youtube videos, viral links, memes, and interesting websites as part of the discussion. It’s neither a good thing nor a bad thing, just the way it is. Each circle has its own center that life revolves around and here the Internet simply isn’t in that mix. It’s curious to me how living in a place where the Internet is of low importance has in turn made web browsing a low priority for me as well.  Context really is everything.

The county’s lack of online visibility surely contributes to its isolation, but that’s how people here prefer it. Job growth is a central issue in the current campaigns, but in Rio Arriba County that means helping locals start businesses rather than attracting industries to the area. Unlike neighboring Santa Fe and Taos Counties, Rio Arriba has little interest in drawing tourists to the area, despite being primed for businesses to sprout up around elk hunting, four-wheeling, camping, and hiking.

As far as I know there is nowhere in the county one would go to ski or snowboard. There are no rafting or kayaking outfits. Along the highways you may see a farmer selling chilis or tree nuts. What you won’t find are travel plazas, truck stops, or signs advertising the sights or landmarks ahead.

A battered sign indicating a county road is all you get. You never know what you’ll find. Some unmarked trail? Perhaps. A waterfall? Possibly. An elk grazing? Not unlikely. It’s not unusual to see people park on the shoulder of the highways, or wherever there is room, to go off adventuring. These mystery adventures, I’ve found, almost always have a big pay off.

Google Maps is a worthless tool in these parts. And I can’t say people are much better at providing directions. Ask someone for directions you’ll more likely be given a sequence of visual cues than an address. Head north toward such and such a mesa (if you pass the 8-mile marker you’ve gone too far) turn left on the gravel road about ten miles out of town (by the sign warning of falling rocks), stay left when the road forks, then turn right by the big tree with the broken branch. You can’t miss it!

There is nothing convenient about life here.

Yet somehow that makes life all the easier.