The white dog is the stray I took in last month. She and Rumpus, also pictured above, have become best buds.

Española, NM – The stray I took in last month has decided to stick around.

To summarize: I saw a skin-and-bones dog hobbling down my street while pulling up to my driveway a few weeks back. For whatever reason, the animal followed me down the driveway and over the wooden bridge crossing the acequia. I didn’t realize this until later when I left to run errands, when I found her curled up beneath my van. I fed her bits of cheese, then moved to canned food. This went on for two days until my landlord decided to call animal control. She has three dogs and we didn’t want one.

The dog’s luck, in other words, was almost up.

But she grew on us. Our landlord said we were free to keep her and at the last minute we did. The odds of her being euthanized at the shelter if no one claimed her were fairly good, and it didn’t seem right. Besides, she was a keeper from the beginning. She didn’t bark or chew up our things. She knew how to sit and dashed my way each time I whistled for her. She didn’t beg for food and played nice with Rumpus and Bob (the third dog isn’t a socializer). She was a sweet animal who’d fallen on hard times.

But then I began feeling guilty about keeping her. She’s obedient to a fault, suggesting someone somewhere at some time cared for her, a likelihood reinforced by the accusatory questions: You kept someone’s dog? Others suggested she may have ran off after something spooked her. I wondered if taking her to the shelter would’ve been the right thing to do, to give her rightful owners a chance to claim her. I thought of how pissed I’d be if someone asserted ownership over my old dogs during one of their many forays through the neighborhood. 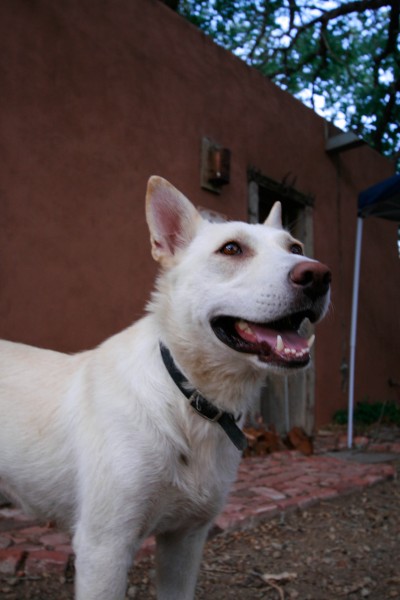 About twelve years ago I caught a couple attempting to walk off with my friend’s dog, Zoe, on Phish lot. A beautiful Akita mix, Zoe ran off after the kids next to us set off a bunch of firecrackers. For two hours we searched for her. With the show soon beginning, we made one final sweep of the lot. At some point I saw Zoe’s tail – with its distinct Akita curl – disappear into a row of cars. By the time I caught up to her, the couple was loading her into their vehicle. I tussled with the woman for control of the leash, telling her the dog belonged to my friend.

They said they’d found her wandering the lot, but refused to give me custody of her, even though I knew all the info on her tags. They wanted me to bring the owner to them. I said we’ll find him together, which we did. When I told him the couple was about to drive off with her, he about lost his shit. He was too relieved to be angry. What mattered was that dog and master had been reunited.

I’ve mulled that incident many times over the last couple of weeks, wondering if it was wrong of us not to impound the animal. Unlike Zoe, however, the stray was dreadfully undernourished, collarless, and so weak she could barely stand. I figured we would feed her back to health so she could press ahead, perhaps going back to from where she came. She’s never chained up so leaving whenever she chooses is a real option for her. We didn’t decide to keep her; she decided to stay.

The only time she’s penned up is when we’re away, because I don’t know how to teach her to not chase after me when I leave. Sometimes I’ll try sneaking away while she’s exploring with Rumpus. But without fail she’ll be there in my rearview mirror dashing madly toward Purple Thunder before I reach the stop sign down the road. It’s not a good road for people to walk down, let alone a pet. I’d hate to see her splattered all over the blacktop.

Because she is so clingy,  it’s hard to imagine her running away from a loving home or becoming lost while out and about, as some have suggested. In these here parts a good many people dump their unwanted things, i.e. trash and pets, in nearby communities. It’s quite possible someone removed her collar and dumped her in Española knowing she’d fit right in with countless other strays. I do, however, wonder often about where she came from, what life was like for her before she found us.

Part of me fears she’ll run off on us as she did on that life, assuming she ran off in the first place. I doubt this was the case. We can’t go anywhere without her tagging along. She’s more needy than independent. And when we leave her this anguished look takes hold of her eyes as if she’s worried we won’t come back, as if she knows what it means to be abandoned. Wherever she came from, I suspect the place wasn’t as great as where she is now. I like to think she’s hit the doggy equivalent of the lottery.

Already we have our routines.

At night, once I’ve laid down, she’ll sit beside the bed for awhile and stare at me. She’ll lick at my face a few times, then mosey to the bed of fleece blankets I laid down for her that first night here. There she sleeps until I wake in the morning.